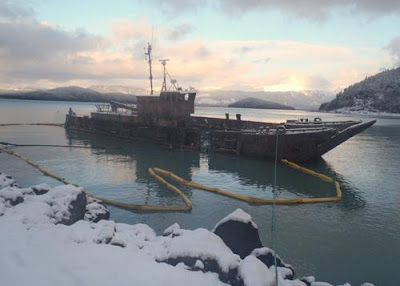 VALDEZ, Alaska — The Coast Guard declared that the 135-foot landing craft Sound Developer no longer poses a substantial pollution threat to the environment and transferred responsibility of the vessel to the City of Cordova Saturday.

Early Saturday morning, the Coast Guard completed a thorough inspection of the Sound Developer to assess completed cleaning efforts conducted by Global Diving and Salvage, Inc. The Federal On-Scene Coordinator, in concurrence with the Alaska Department of Environmental Conservation and the City of Cordova, concluded there was no longer detectable oil present on the water, adjoining shorelines or places where it is likely to reach the water again and determined removal operations complete.

In a formal letter released Saturday afternoon, the Coast Guard FOSC officially transferred responsibility for the landing craft to the City of Cordova, strongly urging disposal of the vessel as expeditiously as possible.

“The Coast Guard greatly appreciates the partnership with the City of Cordova in facilitating the removal of the Sound Developer in a manner that kept the safety and welfare of personnel and environment at the forefront,” stated Cmdr. Benjamin Hawkins, commanding officer Coast Guard Marine Safety Unit Valdez.

Until final disposition of the vessel, the City of Cordova is working directly with Alaska Marine Response to maintain containment boom around the vessel as a precautionary measure.