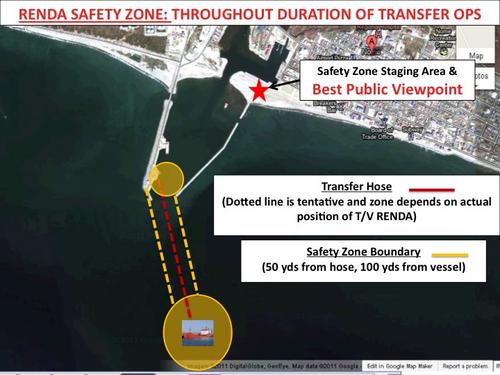 NOME, Alaska — The Coast Guard and the City of Nome strongly encourage the residents of Nome to avoid traveling on the ice as the Coast Guard Cutter Healy and tanker Renda begin transiting shore fast ice surrounding the city.

“We are extremely concerned that the icebreaking vessels offshore may cause fractures in shore fast ice near shore which could potentially pose a serious safety risk to anyone who may be on the ice. We strongly encourage residents to remain on shore and avoid transiting on the ice as the ships transit in and out of the shore fast ice until the ice has time to re-freeze,” said Lt. Nicole Auth, Coast Guard safety zone coordinator in Nome.

The Coast Guard would also like to alert community members that they may want to remove any fishing and crabbing equipment from the ice prior to the ships arrival as it may become lost or damaged due to the vessel’s transit.

“We encourage community members who may have fishing and crabbing gear on the ice to remove it prior to the Healy and Renda’s arrival as it may become lost or damaged when the vessels transit,” said Auth.

Throughout the duration of the transfer operations, persons and vehicles will be restricted from areas 50 yards around fuel delivery hoses and 100 yards from the tanker Renda per an established Coast Guard safety zone. These areas will be marked with wooden survey stakes and surveyors tape. In addition, the fuel transfer hose will be lit during hours of darkness.

The best place to view the operations will be from the uplands near Middle Beach along the south side of the Small Boat Harbor. Coast Guard personnel monitoring the safety zone will be available in a vehicle at that location to answer any questions.

It is encouraged for residents to monitor Nome radio stations and television stations for the latest information.