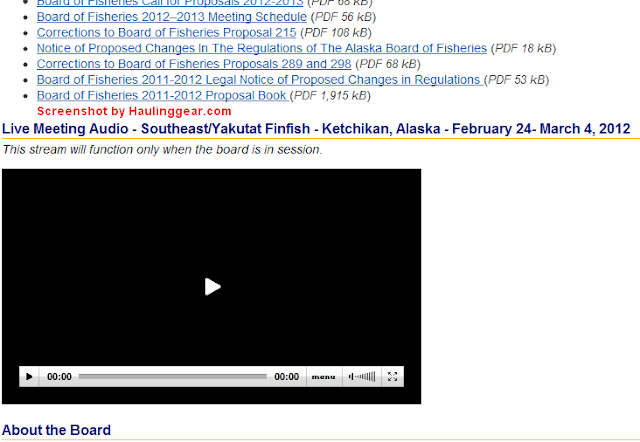 How things work
A marvelous facet of Alaska government is seen up close and at its best when the Board of Fisheries convenes. There, seven citizens preside over management of the resource that in large part led to statehood. Territorial residents knew they could do a better job of managing our fish than did the feds. (You’ve heard about the fish traps in “The Fish Pirate’s Daughter” local farcical melodrama? They weren’t the figment of a comedy writer’s imagination; they were real and... http://www.ketchikandailynews.com/free/local-edit-fri-board-of-fish

Cold Bay's aviation plans up in the air
February 24th 3:36 pm | Hannah Heimbuch
One of Alaska's rural hubs for air-traffic faces an uncertain future as the Department of Transportation and the Federal Aviation Administration discuss modifications in Cold Bay.... http://www.thebristolbaytimes.com/article/1208cold_bays_aviation_plans_up_in_the_air

FRIDAY, FEBRUARY 24, 2012
Labor crisis looms for Alaska processors
U.S. Sen. Mark Begich, D-Alaska, recently sent two letters to the Obama administration objecting to possible changes that could shut off a major source of workers for the state's seafood processing industry. At issue is the Summer Work Travel Program, which allows foreign college students to come to the United States on a J-1 visa to work... http://deckboss.blogspot.com/2012/02/labor-crisis-looming-for-alaska.html

Icicle Settles Over Crab Violations
By Alexandra Gutierrez
6:00PM
Thu February 23, 2012
Icicle Seafoods will be paying a fine of $615,000 for handling more crab than it was allowed... http://kucb.org/post/icicle-settles-over-crab-violations

Well-cooked wild salmon snacks are nutritious dog food
Posted 02/24/2012
by - Margaret Bauman
Canine snacks made from wild Alaskan salmon, carefully cooked under temperature controlled conditions, offer a nutritious treat for pets that most dogs find really hard to resist. Packed full of omega-3 oils, plus vitamin E and rosemary extract added as a preservative, Yummy Chummies, produced by Arctic Paws in Anchorage, are now sold nationwide from warehouse giants like Costco and Sam’s Club to pet food shops in many states. “Feeding salmon to dogs has been engrained in our culture for a very long time, but as... http://thecordovatimes.com/article/1208well-cooked-wild-salmon-snacks-are-nutritious

Fisheries science funding levels varied across entities
February 24th 2:55 pm | Laine Welch
It's a mixed bag in America in terms of bankrolling 'the best available science' for our nation's fisheries. Based on the preliminary federal budget released last week, funds for the National Oceanic and Atmospheric Administration went from $4.7 billion to $5.5 billion, an increase of about $750 million..... http://www.thebristolbaytimes.com/article/1208fisheries_science_funding_levels_varied

Years ago in the Times-Fisherman: City council proposes new taxes to increase revenue
February 24th 3:34 pm | Jim Paulin
June 12th, 1992
Dillingham- The city's latest proposed contribution to the school district budget is $617,000, down from the current $650,000 the city now pays, but more than earlier proposals.... http://www.thebristolbaytimes.com/article/1208years_ago_in_the_times-fisherman_city_council

Northern Leader promises to be eco-friendly giant
February 24th 2:38 pm | Hannah Heimbuch
Alaskan Leader Fisheries announced last week they've contracted the building of a large ship to add to their fleet in Western Alaska. ALF is calling the F/V Northern Leader one of the largest and most eco-friendly commercial fishing vessels ever constructed in the U.S. At a whopping 184 feet, the ship's refrigerated fish-hold will be able to pack nearly 2 million pounds of seafood.... http://www.thebristolbaytimes.com/article/1208northern_leader_promises_to_be_eco-friendly

Fishing and Facebook becoming a common combination
February 23, 2012 6:00 AM
JANNETTE PIPPIN - DAILY NEWS STAFF
MOREHEAD CITY — Fishing and Facebook are becoming a more common combination as groups along the North Carolina coast turn to the Internet and social networking to spread the word about the value of local seafood. Carteret Catch, a Carteret County-based group that works to sustain the county fishing industry and promote locally caught seafood, is updating its website and has a page on Facebook. While the group wants to preserve a commercial fishing industry rooted in tradition, Carteret Catch members also know that... http://www.jdnews.com/news/facebook-100912-fishing-becoming.html

Destination Of X-Band Radar Remains Unclear
6:26PM
Thu February 23, 2012
Since it deployed six years ago, the Missile Defense Agency’s most powerful mobile radar has traveled across the Pacific, conducting flight tests and keeping an eye out for any ballistic missiles targeted at the United States. But while it’s been to Seattle and Pearl Harbor, it’s never made it to its homeport of Adak, where a $26-million mooring for the radar lies unused. With the release of Missile Defense Agency’s funding... http://kucb.org/post/destination-x-band-radar-remains-unclear

UAF moves ahead with electric upgrade
Feb 25, 2012
FAIRBANKS — The University of Alaska Fairbanks has received the go-ahead to launch the second phase of a potential $50 million boost to its aging campus electrical infrastructure. The continuing upgrade, approved by the Board of Regents last week, will tie UAF’s buildings to an improved core that has been updated during a nearly completed first phase. The overall goal is to improve a 50-year-old electrical distribution system that’s showing its age.... http://newsminer.com/view/full_story/17654775/article-UAF-moves-ahead-with-electric-upgrade

How did Dodo break the internet? http://www.zdnet.com.au/how-did-dodo-break-the-internet-339332390.htm

RUSH : Yeah, so it's not... It had to be 1985 that I got the Apple IIc and I had CompuServe and the Dow Jones News retrieval, and that's when I started downloading. CompuServe back then, AP didn't know what was going on. UPI did not know what was going on. You had access to everything. UPI welcome back AP didn't know it. It was so new you were able to pirate the feed. AP, it took 'em a few years. They figured out what was going on and started instituting now the price that you had to pay. For a while there it was cool, and Dow Jones News retrieval. The monitor was green dots, and they had an ink-jet printer (impression) that took forever to print things. ... http://www.rushlimbaugh.com/daily/2012/02/24/open_line_friday_question_what_was_your_first_home_computer