Curtains for LightSquared? NTIA says GPS interference is unfixable
By Tim ConneallyPublished 17 hours ago
LightSquared, the aspiring 4G wireless network built in the "L band" of spectrum has been under fire from the GPS industry for the last year over the interference the experimental network was shown to create for GPS receivers. Due to the L-band's close proximity to frequencies used in satellite communications, about half of the frequencies LightSquared planned to use in its network were shown to cause interference on some GPS receivers.Today, the National Telecommunications and Information Administration (NTIA) sent a letter....  http://betanews.com/2012/02/14/curtains-for-lightsquared-ntia-says-gps-interference-is-unfixable/
Related:


Feb 14, 2012 - 04:38 PM AKST
Fishermen spar with bycatch cuts delayed
BY ANDREW JENSEN, ALASKA JOURNAL OF COMMERCE
SEATTLE — Less than a year after telling the public Gulf of Alaska halibut bycatch would be reduced in 2012, the North Pacific Fishery Management Council has bowed to a variety of pressures from bureaucratic to biological, and cuts won’t take effect until at least 2014. Last April, the council initiated work on cutting halibut bycatch through its annual quota process that takes place each December, which is allowed under the current fishery management plan, or FMP, for the Gulf and would have put the cuts in effect this year. However, National Marine Fisheries Service, which is responsible for implementing council actions, flagged numerous administrative difficulties with that approach and at its October meeting the... http://www.alaskajournal.com/Alaska-Journal-of-Commerce/AJOC-February-12-2012/Fishermen-spar-with-bycatch-cuts-delayed/

WEDNESDAY, FEBRUARY 15, 2012
Fisheries Technologists Discuss Byproducts, Freeze-Dry Potential
A researcher with the University of Alaska’s Seafood Science and Technology facilities at Kodiak says great progress is being made in utilization of Alaska fish processing byproducts, and that there is profit to be made too.Peter Bechtel, who is also affiliated with the US Department of Agriculture’s Agricultural Research Service at Kodiak, addressed the subject this week before the 63rd annual meeting of Pacific Fisheries Technologists at Anchorage. Bechtel said current fish byproduct uses include human supplements, ingredients for human food, ingredients for human food...... http://fnonlinenews.blogspot.com/2012/02/fisheries-technologists-discuss.html

My Turn: The value of Alaska's fisheries
Posted: February 15, 2012 - 12:00am
By LINDSEY BLOOM
Juneau residents are no stranger to the spectacle of Xtra Tuff boots parading on our sidewalks this time of year, but if you’ve noticed an uptick this week it’s likely because—at least unofficially—Commercial Fishing Week is upon us. From all across Alaska, board and business members of the largest commercial fishing organizations in the state are in Juneau to talk fish, fishing, and the future. It’s also a good opportunity to take a step back and recognize the important cultural and economic value of our commercial fisheries.While the numbers vary source to source, Alaska is indisputably home to one of the best and most productive fishing industries in the world. Figures released by the Alaska State Department of Fish and Game estimate our fishermen receive $1.5 billion for their catch annually, and that the total... http://juneauempire.com/opinion/2012-02-15/value-alaskas-fisheries

House Bill could expand geoduck farming to Gulf
Allows transfer of geoduck spat to farms outside Southeast
Posted: February 15, 2012 - 12:03am
By RUSSELL STIGALL
JUNEAU EMPIRE
To look at the awkward-looking clam whose name is pronounced “gooey duck,” one would wonder why consumers would pay such good prices for its long foot. The name is Native American in origin and describes the effort of humans and otters to dig them out.... http://juneauempire.com/state/2012-02-15/house-bill-could-expand-geoduck-farming-gulf

WEDNESDAY, FEBRUARY 15, 2012
Freezer-Longliner Hailed as One of the Largest, Most Eco-Friendly Ever
Alaskan Leader Fisheries LLC is hailing a large new freezer-longliner due for delivery in April 2013 as one of the largest, most eco-friendly commercial fishing vessels in the nation. Alaskan Leader Fisheries and J.M. Martinac Shipbuilding Corp. of Tacoma, Wash. announced the contract on Feb. 14.. The Fishing Vessel Northern Leader will be a 184-foot by... http://fnonlinenews.blogspot.com/2012/02/freezer-longliner-hailed-as-one-of.html 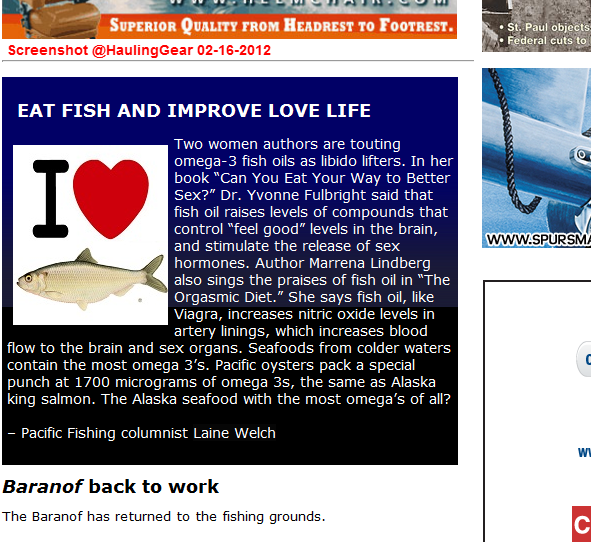 Calkins & Burke's salmon is FoS
15 Feb 2012
Following a successful independent audit of the Alaskan and Canadian salmon fisheries, Calkins & Burke is now authorised to export Friend of the Sea labelled salmon. Founded in 1914 and managed by the fourth generation of the Calkins family, Calkins & Burke Ltd. is a well established industry participant. The company is headquartered in Vancouver, with offices strategically located in the major market centres of Canada and Mexico. Calkins and Burke works with many salmon producing companies in the USA and Canada to.. http://www.worldfishing.net/news101/calkins-and-burkes-salmon-is-fos

SFP’s angle on Alaskan salmon certification debate
WEDNESDAY, 15 FEBRUARY 2012 10:22
THE Sustainable Fisheries Partnership (SFP) has released a briefing paper concerning the current debate around the certification of Alaskan salmon. The paper, which has been released today, is intended for corporate partners who have actively sought the views of the SFP on the current controversy, which was caused by the decision of eight major Alaskan salmon processors deciding to leave their MSC-accredited schemes in favour of ones operated by the Alaskan Seafood Marketing Institute (ASMI). Some of the points made by... http://www.fishnewseu.com/latest-news/world/7590-sfps-angle-on-alaskan-salmon-certification-debate.html

House bill targets 'Citizens United
RealClearPolitics
Ketchikan Republican Rep. Kyle Johansen asked Gara if he supports limiting money spent on donors to issue campaigns, like the groups that fund constant commercials either in support of or against Pebble Mine... http://www.realclearpolitics.com/news/ap/politics/2012/Feb/14/house_bill_targets__citizens_united__decision.html

J.M. Martinac Shipbuilding wins bid to build fishing vessel
Tacoma shipbuilder plans to double workforce to build cod-fish-processing vessel.
By Hal Bernton
Seattle Times staff reporter Originally published February 14, 2012 at 7:41 PM | Page modified February 14, 2012 at 11:28 PM Tacoma-based J.M. Martinac Shipbuilding will build the 184-foot Northern Leader, the largest new fishing vessel to be constructed in the Pacific Northwest in more than two decades, according to industry officials. The factory long-liner, capable of sophisticated processing that uses more of each fish, will cost $25 million to construct, according to Nick Delaney, managing director of Alaskan Leader Fisheries, the company that will own the boat.The Northern Leader is scheduled to be completed in April 2013; Martinac expects to roughly double its current workforce to 100 employees. The $25 million in construction costs will pay for.... http://seattletimes.nwsource.com/html/businesstechnology/2017508024_longlinevessel15.html /// Photo > http://www.alaskajournal.com/Blog-Fish-Bytes/February-2012/Alaskan-Leader-to-build-new-longliner/

Arctic
Will increased Arctic shipping traffic be harmful to whales?
CBC News | Eye on the Arctic | Feb 14, 2012
New research suggests that increased shipping in the North could pose a serious threat to whales. Scientists in the United States found that underwater noise from ships can cause stress in whales. It's believed that stress makes them more susceptible to disease and less likely to reproduce. Researcher Scott Kraus of the New England Aquarium was studying whales in the Bay of Fundy on Sept. 11, 2001. On that day, planes and ship traffic in the Eastern Seabord area ground to a halt as the United States government responded to the terror attacks on New York City. "There was nothing, nobody else out there. And there was....... http://www.alaskadispatch.com/article/will-increased-arctic-shipping-traffic-be-harmful-whales

Naming of Navy ships returns to tradition
Recent choices drew criticism
By Rowan Scarborough-The Washington Times Tuesday, February 14, 2012
Navy Secretary Ray Mabus, under fire from Congress and veterans for naming ships after fellow Democrats and social activists, plans to announce another round of ship names in the near future that will be more traditional, a Pentagon official tells The Washington Times.... http://www.washingtontimes.com/news/2012/feb/14/naming-of-ships-returns-to-tradition/

Are Americans too dumb for real news?
By David Gewirtz | February 15, 2012, 5:47am PST
Summary: If we can’t count on Time to tell us what we need to be paying attention to, then who can we count on?... http://www.zdnet.com/blog/government/are-americans-too-dumb-for-real-news/11156

Japanese language support next in line for Siri?
By Sam Byford on February 14, 2012 11:56 pm
It looks like Japanese could be the next language to work with Siri, if the voice recognition software itself is to be believed. Try it for yourself — ask her what languages she speaks, and you'll get the answer shown above. So far Siri has only been able to understand... http://www.theverge.com/2012/2/14/2799149/japanese-language-siri-coming-soon

Rocket to be flown into active aurora from Poker Flat
by The Associated Press
Feb 15, 2012 | 138 views | 0  | 0  |  |
FAIRBANKS, Alaska - A NASA sounding rocket to gather information on space weather conditions which affect satellite communications will be launched north of Fairbanks.... http://newsminer.com/view/full_story/17538713/article-Rocket-to-be-flown-into-active-aurora-from-Poker-Flat