April 03, 2012
TUESDAY, APRIL 3, 2012
Fresh baloney from Whole Foods
Portland
Shoppers at Whole Foods now have something else to feel smug about. The eco-grocer says it will stop selling "red-rated" wild caught seafood as of April 22 (Earth Day). A red rating indicates a species is overfished or that its harvest produces excessive bycatch or undesirable habitat impacts..... http://livingitupinsouthernmaine.blogspot.com/2012/04/fresh-baloney-from-whole-foods.html

Kootznoowoo seeks federal control of marine waters
Posted: April 3, 2012 - 12:04am
By RUSSELL STIGALL
JUNEAU EMPIRE
Kootznoowoo Inc. has turned to the federal government in an attempt to restore salmon numbers for subsistence use by Angoon village residents. The corporation’s petition was a topic of contention at the recent Southeast Alaska Subsistence Regional Advisory Council meeting in Juneau, held March 21-23.... http://juneauempire.com/local/2012-04-03/kootznoowoo-seeks-federal-control-marine-waters

Frozen longline inventory may impact fish prices
by Joe Viechnicki
March 30, 2012 10:16 am
Frozen inventory of halibut and black cod from last season along with a weakening Japanese Yen are cooling off hot markets for Alaskan fish. That’s according to Trident Seafoods Petersburg plant manager Dave Ohmer. He recapped the 2011 fishing season and offered some thoughts about the upcoming year at a noon meeting of the Petersburg Rotary Club this week..... http://www.kfsk.org/2012/03/30/frozen-longline-inventory-may-impact-fish-prices/

Forged Signatures Lands Coastal Management Program Petitioner in Hot Water
KMXT Staff Report
A Fairbanks woman hired as a petitioner by the Alaska Sea Party has been charged with submitting fraudulent signatures and four other misdemeanor and felony charges. When Deborah A. Carroll submitted the fraudulent petition booklet, the Alaska... http://www.kmxt.org/index.php?option=com_content&task=view&id=3666

News
Industry-backed Alaska bill could block citizen opposition to big projects
Jill Burke | Apr 01, 2012
The Alaska Legislature is considering making it tougher for citizens to use the courts to stop oil, gas, mining or other industrial projects they oppose. The effort is pitting environmentalists against industry, and raising questions about whether only the moneyed should have access to the judicial system. House Bill 168 comes from Rep. Eric Feige, R-Chickaloon. He's among those who believe resource development is often hamstrung by frivolous lawsuits lodged by people with an ideological opposition to development instead of those who really believe there's a critical flaw with a particular project..... http://www.alaskadispatch.com/article/industry-backed-alaska-bill-could-block-citizen-opposition-big-projects

Alaska Beat
Parnell's Road to Resources plan slammed by environmental groups
Alaska Dispatch | Apr 02, 2012
A report by three environmental organizations criticizes Gov. Sean Parnell’s plan to build roads to Umiat, Nome and Ambler in an effort to make it easier to tap some of Alaska’s remote natural resources. Parnell wants to spend $24 million to advance the planning on his so-called Roads to Resources effort that aims to open development in some far-flung corners of Alaska. Actually building the roads would cost an estimated $1.7 to $2.4 billion... http://www.alaskadispatch.com/article/parnells-road-resources-plan-slammed-environmental-groups

Feds try to clarrify rules on use of sea otter
by Matt Lichtenstein
March 30, 2012 4:03 pm
Federal officials say they are trying to clarify rules for Alaskan Natives’ use of sea otters. A draft set of guidelines from the US Fish and Wildlife Service is aimed at addressing some of the confusion over what’s allowed. It’s been a frustrating situation for Native hunters and artisans who say the government has discouraged them from using the animals. Matt Lichtenstein reports:.... http://www.kfsk.org/2012/03/30/feds-try-to-clarrify-rules-on-otter-use/

Pebble’s risks
by Emma Osimowicz, sophomore, West Valley High School
Apr 01, 2012 | 940 views
Letter to the editor
March 30, 2012
To the editor:
Pebble Mine is a bad idea because it could destroy the wild salmon population and other wildlife, risk as many jobs as it’s providing and wouldn’t provide any significant tax revenue to Alaska.... http://newsminer.com/view/full_story/18078681/article-Pebble%E2%80%99s-risks 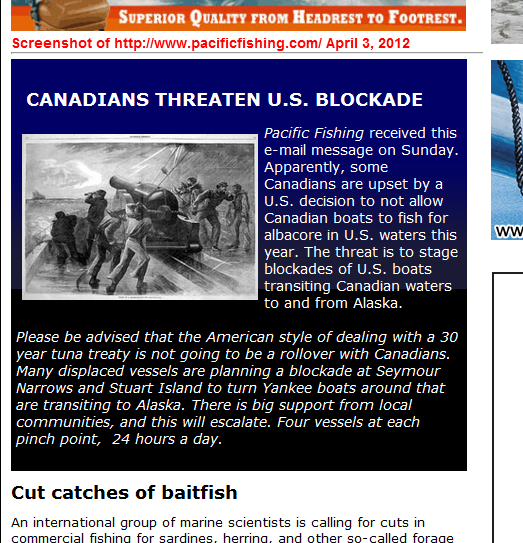 Anti-trust case against Clackamas-based Pacific Seafood Group settled
Published: Monday, April 02, 2012, 5:07 PM     Updated: Monday, April 02, 2012, 10:40 PM
Pacific Seafood Group has successfully fought off a class-action lawsuit by Oregon commercial fishermen that once seemed a major threat to the Clackamas-based company. The fisherman claimed that Pacific used its immense market clout to suppress the price it paid for groundfish, Dungeness crab, shrimp and other products. They initially sought as much as $520 million in damages and that Pacific be broken up.... http://www.oregonlive.com/environment/index.ssf/2012/04/anti-trust_complaint_against_c.html

Too Many Small Fish Are Caught, Report Says
By HENRY FOUNTAIN
Published: April 2, 2012
An international group of marine scientists is calling for cuts in commercial fishing for sardines, herring and other so-called forage fish whose use as food for fish farms is soaring. The catch should be cut in half for some fisheries, the scientists say, to protect populations of both the fish and the natural predators that depend on them..... http://www.nytimes.com/2012/04/02/science/earth/forage-fish-catches-should-be-reduced-report-says.html


I’m not waiting by the phone for the Nobel committee to call | Watts Up With That? bit.ly/HQYNAr
— Hauling Gear #Alaska (@haulinggear) April 3, 2012