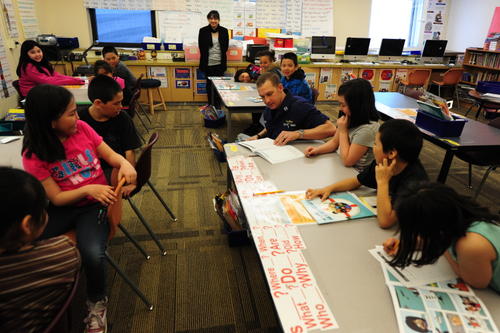 SAVOONGA, Alaska – Lt. Tom Pauser, with the 17th Coast Guard District’s prevention division, answers a student’s question at Hogarth Kingeekuk Sr. Memorial School April 10, 2012. Pauser was one of many Coast Guardsmen to visit rural Alaskan schools to give cold-water safety training in classrooms. U.S. Coast Guard photo by Petty Officer 3rd Class Grant DeVuyst.
SAVOONGA, Alaska – The room has the look and feel of any other American classroom. The familiar laughter of children fills the air. Artwork and educational posters decorate the walls. Desks are lined across the classroom, most occupied with curious students.
The peculiar, blue-clad instructors at the head of the class have the undivided attention of both the students and their teacher. After all, it is not often Hogarth Kingeekuk Sr. Memorial School, on St. Lawrence Island, gets visitors.
The island, encased by the frozen Bering Sea during the winter months, is the location of two small villages - Savoonga and Gambell. The inherent danger of Alaska’s frigid waters, coupled with remote locations, makes water safety a huge concern for rural, coastal communities like these two.
Enter the Coast Guard. As a part of the larger Arctic Shield 2012 operations, the Coast Guard partnered with the state of Alaska’s Office of Boating Safety to administer the Kids Don’t Float program.
“By working in conjunction with the State of Alaska, we were able to reach out to many students in far Western rural Alaskan villages to teach a variety of age groups about cold water safety and the importance of wearing a life jacket,” said Lt. Tom Pauser. “The curriculum the state provided us made the visits not only educational for the students, but gave us an entertaining way to relay the importance of our message to the students.”
Coast Guardsmen throughout the 17th District have been travelling to remote Alaskan towns to visit schools where cold-water safety training can make a difference.
“We’re finding in some communities that the kids don’t use flotation devices as often as they should,” said Senior Chief Petty Officer Josh Braarud, of the Sector Anchorage logistics division.
Savoonga, the “Walrus Capital of the World,” was no exception. In class, many students shared that life jackets were not a priority when playing or working on the water.
In waters as frigid as the northern Bering Sea, a little flotation can mean the difference between life and death. Braarud and Pauser brought this information to the school in a kid-friendly way, with satisfying results.
The lessons also prepared the older students to act as peer educators to the younger students. The state hopes to see high school students giving the same training the Coast Guard gave in the following years.
“The students have been very receptive to the lessons,” said Braarud. “We feel like we are having a positive impact.”