The deployment of the buoy will provide essential position updates for Coast Guard command personnel to use in helping ensure the safety of maritime transportation operations in the area.

The fishing vessel has been drifting unmanned at sea since the 2011 Fukoshima earthquake and subsequent tsunami more than a year ago.
U.S. Coast Guard photo by Air Station Kodiak.
ANCHORAGE, Alaska — Coast Guard District 17 personnel are monitoring a derelict Japanese fishing vessel that is drifting approximately 180 miles west of the U.S. and Canadian border Monday.
The RYOU-UN MARU was sighted by the Canadian coast guard more than a week ago in Canadian waters. The vessel drifted into U.S. waters Saturday and is currently 180 miles west of the Dixon Entrance in Southeast Alaska. The fishing vessel has been drifting unmanned at sea, presumably since the 2011 Fukoshima earthquake and subsequent tsunami which occurred more than a year ago.
An Air Station Kodiak HC-130 Hercules airplane conducted a flyover of the vessel on both Saturday and Monday to verify its location and deployed a data marker buoy into the water near the vessel to provide real time updates of the vessel’s location. Coast Guard District 17 is actively broadcasting the vessel’s current location to mariners to alert them about the navigation hazard.
Due to the vessel’s current location in the busy shipping lanes near the Dixon Entrance, the vessel is a potential hazard to navigation. The potential for a pollution incident is unknown at this time but officials have limited concerns about any biological threats due to the length of time the vessel has been at sea.
“The unlit and unmanned vessel, which was originally being monitored by Canadian authorities, is now drifting through high traffic shipping lanes in U.S. waters and has become a potential threat to mariners,” said Capt. Daniel Travers, D17 chief of incident management. "We are tracking the vessel and working with federal, state and local agencies to ensure the safety of the maritime transportation system and the marine environment.”
The Coast Guard is evaluating several courses of action to mitigate any threats to the maritime transportation system and the environment.
A Coast Guard cutter is being deployed to assess the situation and the condition of the vessel. (click image for hi-res photo) 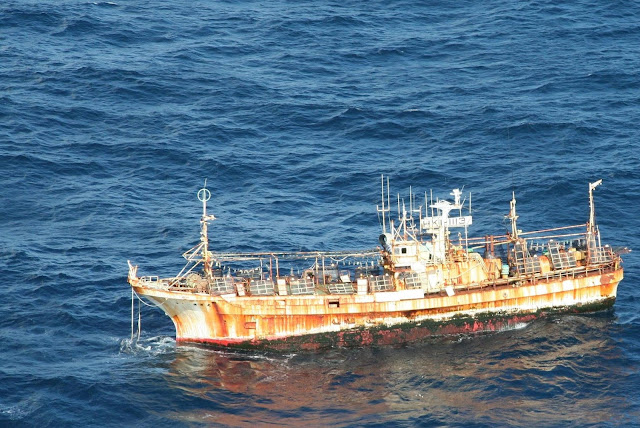