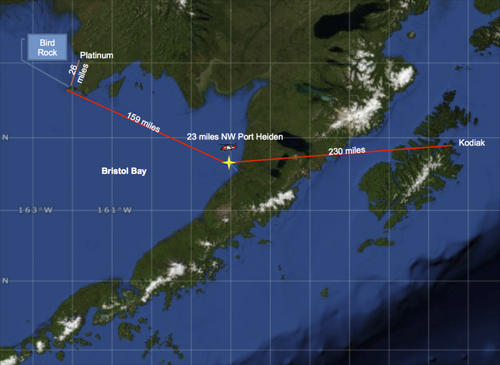 "The vessel's crew ducked into an ice floe to avoid a storm and has been drifting with the ice since," said Chief Petty Officer Jeffrey Roberto, a search and rescue controller with the District 17 command center in Juneau. "The crew had supplies with them for a day trip but we recommend mariners take enough supplies with them for multiple days at a time because anything can happen in Alaska's extreme environment."

The Alaska State Troopers contacted the Coast Guard Friday requesting assistance in a search for the overdue skiff in Bristol Bay. Before the Coast Guard could launch, the Troopers incorrectly identified an identical skiff with the same amount of people as the overdue party. However, Sunday the Troopers were informed that the party was still missing by family members. The Coast Guard launched an HC-130 Hercules airplane and crew from Air Station Kodiak to search the region.

The skiff was located in the ice floe by the Hercules crew at about 9:45 a.m. approximately 173 miles from their homeport of Platinum. The vessel had motored into ice to avoid a storm, ran out of gas and drifted across Bristol Bay with the floe.

Following the Hercules sighting of the skiff and four people, an MH-60 Jayhawk helicopter was launched from Air Station Kodiak to rescue the four people. The helicopter crew safely hoisted the skiff crew at 12:30 p.m. and took them to Dillingham to be evaluated by medical personnel.

The skiff crew originally departed Platinum to make a 23 miles transit to Bird Rock to collect gull eggs for subsistence use.