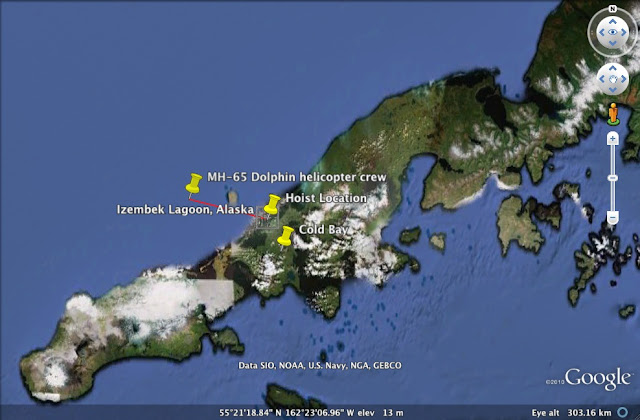 The watchstanders directed the launch of the rescue helicopter crew, which is forward deployed on the Coast Guard Cutter Munro, to conduct a search. The rescue crew hoisted the two men at 2:53 a.m. from the beach in good condition with no reported injuries and took them to Cold Bay.

"The two men filed a detailed float plan with friends and family with the time they were leaving and returning, which resulted in them being found quickly," said Chief Petty Officer Jeffrey Roberto, command duty officer with the District 17 command center. "The Coast Guard highly recommends that anytime mariners decide to get underway that they file a float plan with friends, family and their local harbormaster. A float plan should include departure and return time information, number of people onboard and intended routes and destinations."

The weather at the time of the rescue was report as winds of 12 mph with an air temperature of 32 degrees Fahrenheit.