Inside China: China sees conspiracy in sea law convention
By Miles Yu Wednesday, May 30, 2012
The Chinese government reacted strongly recently to U.S. government efforts to ratify the U.N. Convention on the Law of the Sea (UNCLOS), calling the move a dangerous U.S. military plot to interfere further in Asia’s regional affairs. “It is dangerous that some U.S. politicians are expanding U.S. claims and raising its degree of interference. This will aggravate regional tensions and is not conducive to resolving issues,” said an article published Saturday by the official Xinhua News Agency and headlined, “Kerry statement exposes U.S. designs on South China Sea,” . The article was referring to Sen. John F. Kerry’s May 23 statement at a Senate hearing on the UNCLOS. Mr. Kerry, chairman of the Senate Foreign Relations Committee, remarked at the hearing that China and other countries are “staking out illegal claims in the South China Sea and elsewhere.” The Xinhua report said Mr. Kerry’s statement “exposed the [U.S.]’s selfish intention for the South China Sea.” But the report said China sees something more sinister than..... http://www.washingtontimes.com/news/2012/may/30/inside-china-china-sees-conspiracy-in-sea-law-conv/ 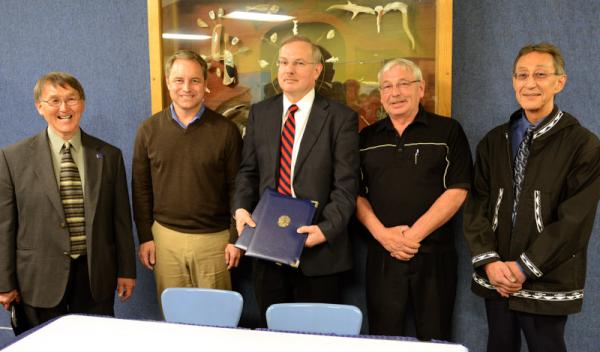 WEDNESDAY, MAY 30, 2012
Bristol Bay Fishermen Have New Marketing Website
While most of the news on wild Alaska salmon is focused for now on the famed Copper River sockeye and king salmon, hundreds of harvesters are preparing for the Bristol Bay sockeye salmon fishery opening, which opens officially on June 1..... http://fnonlinenews.blogspot.com/2012/05/bristol-bay-fishermen-have-new.html

Record number of salmon predicted for Chitina opener
by Tim Mowry
May 30, 2012
FAIRBANKS — Get your dip nets ready. Grab the fish bonker. Make room in the freezer. It’s still early, but the Copper River red salmon run is shaping up to be one of the biggest ever and the river should be full of fish when the Chitina personal use dip net fishery opens on June 7. Fish are flooding by a sonar counter at Miles Lake, about 70 miles downstream of Chitina, in.... http://newsminer.com/view/full_story/18782394/article-Record-number-of-salmon-predicted-for-Chitina-opener

WEDNESDAY, MAY 30, 2012
Bering Sea Research Tells of Impact of Changing Ecosystem on Fisheries
A special issue of the journal Deep Sea Research II available online documents how Bering Sea fish, birds and marine mammals are changing how they eat, bear their young and make their homes in response to changes in sea ice extent and duration. The work represents newly..... http://fnonlinenews.blogspot.com/2012/05/bering-sea-research-tells-of-impact-of.html

Federal Chinook fishery closed in Yakutat
Wednesday, May 30, 2012
Story last updated at 5/30/2012 - 12:57 pm
Capital City Weekly
YAKUTAT - Yakutat District Ranger Lee Benson has announced that he is acting immediately to protect Chinook salmon in the Situk River near Yakutat. The District Ranger, as in-season manager, is closing the Federal Subsistence fishery for Chinook salmon in the Situk River and prohibiting fishing with gillnet gear and.... http://www.capitalcityweekly.com/stories/053012/out_998092175.shtml

Admiralty Law central in suit over abandoned barge
Tugboat owners that salvaged cargo want company to ante up.
By CASEY GROVE
Anchorage Daily News
Published: May 30th, 2012 10:29 PM
Last Modified: May 30th, 2012 11:39 PM
A barge loaded with equipment and supplies and abandoned when the tugboat towing it sank last summer in the Bering Sea is now at the center of a multi-million-dollar lawsuit in Alaska federal court..... http://www.adn.com/2012/05/30/2485718/admiralty-law-central-in-suit.html

Rural Alaska
New fuel shipper enters Western Alaska, where prices exceed $7 a gallon
Alex DeMarban | May 30, 2012
A new player with deep Alaska roots has entered the fuel-delivery business in Western Alaska, bringing a rare shot of competition to a rugged edge of the state marked by fuel prices that rank among the nation's highest. Imagine paying more than $7 a gallon for gasoline, as some villages did this year. And that's when things go right. When things go wrong and emergency fuel shipments must dribble in by plane, instead of arriving at once by river... http://www.alaskadispatch.com/article/new-fuel-shipper-enters-western-alaska-where-prices-exceed-7-gallon

Kodiak: Fishermen, How's it Going? Professor Wants to Know
May 30, 2012
Jay Barrett/KMXT
If you have ever fished commercially out of Kodiak, there's a chance you may have already gotten a University of Alaska survey in the mail - or soon will. Courtney Carothers is an assistant professor at the School of Fisheries and Ocean Sciences in Fairbanks, and she's interested in knowing how fishermen feel about their occupation. We've attached a copy of the survey if you'd like to look it over.... http://www.kmxt.org/index.php?option=com_content&task=view&id=3847

Craig Medred
Despite Murkowski protests, genetic modification of food is old hat
Craig Medred | May 30, 2012
Somebody please get Sen. Lisa Luddite Murkowski, R-Alaska, down off her high-flying Frankenfish. Enough with the pandering to Alaska commercial fishing interests. Genetic manipulation of food is what humans do. We were doing it indiscriminately and accidentally for thousands of years. Then Gregor Mendel came along in the 1800s to figure out the basic principle of genetics, and we started playing with genes in a much more scientific way. Now Mendel's successors are playing in ways he never imagined. They're going straight to the genetic code to manipulate plants and animals instead of trying to do so through the processes of grafting or.... http://www.alaskadispatch.com/article/despite-murkowski-protests-genetic-modification-food-old-hat

Japanese Debris Popping Up on Unalaska Beaches
By Alexandra Gutierrez
Wednesday, May 30 2012
Over a million pounds of Japanese tsunami debris is still floating on the ocean's surface, and a good bit of it is expected to hit North America’s shores over the next few years. Things like sporting goods, fishing gear, and even a motorcycle have already been spotted..... http://kucb.org/news/article/japanese-debris-popping-up-on-unalaska-beaches/

NOAA increases red snapper fishing catch limits
UNITED STATES
Thursday, May 31, 2012, 04:10 (GMT + 9)
Following an updated population assessment that shows overfishing of Gulf of Mexico red snapper has ended and the population is rebounding, the National Oceanic and Atmospheric Administration (NOAA) is increasing the 2012 commercial and recreational fishing catch limits for the species from 7.53 million lb to 8.08 million lb. The new rule takes effect on 1 June.... http://fis.com/fis/worldnews/worldnews.asp?l=e&country=0&special=&monthyear=&day=&id=52663&ndb=1&df=0