Kasilof fisher poet finds his voice
By BRIAN SMITH
Peninsula Clarion
Published: May 19th, 2012 07:05 AM
Last Modified: May 19th, 2012 07:05 AM
KENAI, Alaska - Words are the thread Steve Schoonmaker weaves to stitch together the two fabrics of his world. Those fabrics are his reality and are as different as burlap and silk.... http://www.adn.com/2012/05/19/2471161/kasilof-fisher-poet-finds-his.html

NASA: A plume of smoke stretched across the Bering Sea on May 11, 2012
The smoke may have arisen from wildfires in the region around Lake Baikal, where numerous wildfires burned in early May. A model from the NOAA Air Resources Laboratory suggests that smoke from the Lake Baikal region would take just a few days to reach the Bering Sea. (click image to see hi-res data at NASA) 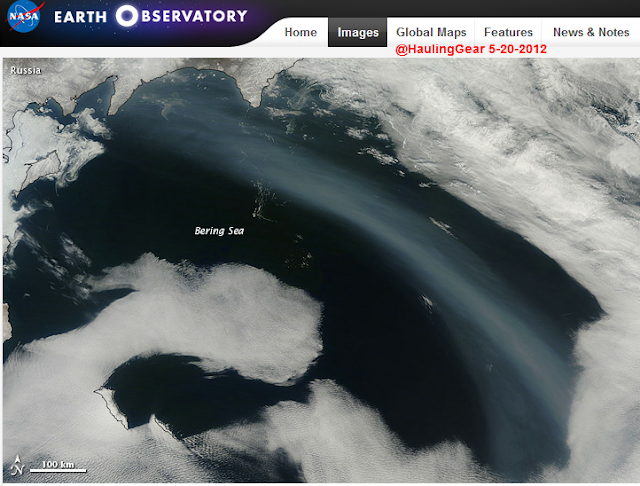 Hilcorp looks to resume oil storage in shadow of volcano
Hilcorp Alaska took over Drift River terminal and applied for plan renewal.
By WESLEY LOY
Petroleum News
Published: May 19th, 2012 09:46 PM
Last Modified: May 19th, 2012 09:47 PM
Hilcorp Alaska plans to resume storing oil at the Drift River tank farm on the west side of Cook Inlet. In fact, the company already has obtained interim permission to fill one of the enormous tanks at Drift River.... http://www.adn.com/2012/05/19/2471782/hilcorp-looks-to-resume-oil-storage.html

NOAA analysis catalogs marine-protected areas
Posted on 17 May 2012
New analysis of updated data shows that although 8 percent of U.S waters are designated as marine protected areas, the majority of these areas are open to fishing and other activities. That’s according to the National Oceanic and Atmospheric Administration, which has cataloged marine protected areas on its website.... http://www.tradeonlytoday.com/home/520088-noaa-analysis-catalogs-marine-protected-areas Full release > http://www.tradeonlytoday.com/images/stories/web/breaking_news/noaa0517.pdf

NOAA says states are on their own in debris cleanup
By Kyung M. Song / The Seattle Times
Published: May 18. 2012 4:00AM PST
WASHINGTON — The lead federal agency in charge of dealing with the tsunami debris from Japan can’t say what kind of flotsam will make landfall and how hazardous it might be. It also can’t say who will be in charge of cleanup or even how 911 operators should handle debris sightings..... http://www.bendbulletin.com/article/20120518/NEWS0107/205180373/


FLOOD WATCH IS NOW IN EFFECT FOR PILOT STATION ON THE YUKON RIVER bit.ly/Knx2Ra
— Hauling Gear #Alaska (@haulinggear) May 20, 2012


Senator Mark Begich from the great State of Alaska passed out Got Your 6 pins in the Nation's capital to help... fb.me/1MKp70pMG
— GotYourSix (@GotYourSix) May 18, 2012


Fairbanks Daily News-Miner - The sky is the limit for kids on Fairbanks Aviation Day bit.ly/KREk1X
— Hauling Gear #Alaska (@haulinggear) May 20, 2012


The Internet of Things arrives at my house thanks to Wovyn - by scobleizer on SoundCloudbit.ly/JctQaL #M2M #SupplyChain
— Hauling Gear #Alaska (@haulinggear) May 20, 2012