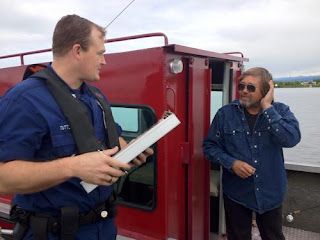 A boarding team from Sector Anchorage joined the Alaska State Troopers this Fourth of July on one of the most popular recreational boating lakes in the area to verify boaters had proper safety gear aboard and that the boat operators were not under the influence of alcohol. By working together, Coast Guardsmen and state troopers were able to cover more ground, and ensure that more boaters were operating safely on the water.

The Coast Guard conducts random safety compliance checks to ensure boaters who are out enjoying the water are doing it safely: for themselves and others. They boarding teams ensure boaters have their license and registration; the appropriate number of flotation devices are aboard, as well as a sound-producing device and a fire extinguisher.

“The most common discrepancies we found were boaters who didn’t keep their boat registration with them and didn’t have a Type IV throwable flotation device,” said Lt. j.g. Lauren Calhoon, a Coast Guard boarding officer with Sector Anchorage, “It’s a federal and state requirement to have a life jacket aboard for every adult as well as a Type IV throwable. A lot of people don’t know that. Yesterday was about education as much as ensuring safety.”

It’s also a state requirement that all children under the age of 13 wear their life jackets at all times while on the water.

“In 2011, 79 percent of boating fatalities were a result of people simply not wearing their life jacket,” said Petty Officer 2nd Class Jeff Tuttle, another Coast Guard boarding officer on scene at the lake. “I’ve been conducting boardings out at Big Lake for the last three years and in that time I’ve seen a huge increase in compliance. It’s great to know that these increases mean more people are safe when they’re out there having fun — and that’s what we want to see.”

If boaters have any questions about the safety requirements the Coast Guard looks for, they are encouraged to go to www.uscgboating.org before getting underway.

“There are different requirements for different bodies of water. What we look for on a lake is different than what is required on the open ocean,” said Tuttle. “We want people to be as safe as possible out there.”

Additionally, the Coast Guard reminds boaters that submitting a float plan is one of the most important things you can do before setting out on the water. There are just too many facts that need to be accurately remembered and ultimately conveyed in an emergency situation. Without a float plan you are counting on someone else, a friend, neighbor, or family member to remember detailed information that rescue personnel need in order to find you - information that can make a difference in the outcome. Ensure that you can get in contact with someone if your plans change.