Deck Watch rocks out with Gary Sinise and the Lt. Dan Band 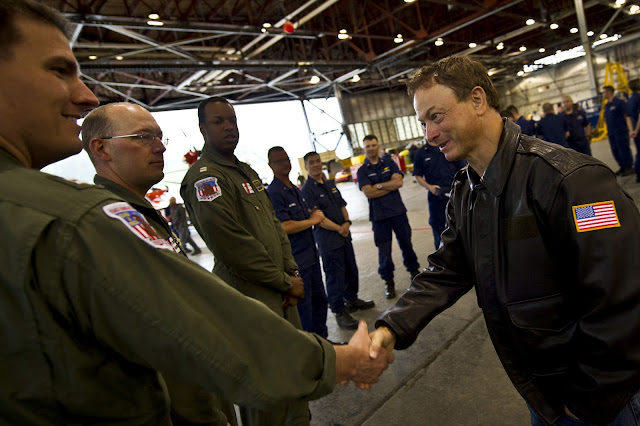 This week Deck Watch spoke with actor Gary Sinise, on tour with the Lt. Dan Band sponosred by the United Service Organization and Triwest Healthcare Alliance, in Kodiak prior to a concnert performance. Sinise spoke with servicemembers at Coast Guard Base Kodiak, Joint Base Elmendorf-Richardson and Eilson Air Force Base while in Alaska.

Also in the news this week:

July 2 – A Coast Guard MH-65 Dolphin helicopter crew forward-deployed to Cold Bay evacuated a vessel owner from Akutan Island on Monday after his sailing vessel ran aground. The owner ran aground in Sarana Bay on Saturday, and once the Coast Guard aircrew arrived on scene, the decision was made that the vessel was not immediately repairable and the one crewmember from the 24-foot sailing vessel was evacuated. The Dolphin crew flew the owner of the vessel to Dutch Harbor for assistance from Coast Guard Marine Safety Detachment Unalaska and commercial salvagers.

July 2 – A Coast Guard Air Station Kodiak MH-65 Dolphin helicopter crew forward-deployed to Cordova, a Station Valdez 45-foot Response Boat-Medium, and a good Samaritan vessel teamed up to assist a vessel taking on water near Goose Island in Prince William Sound Monday. Shortly after the Dolphin crew arrived on scene, the good Samaritan vessel Kingfisher pulled up alongside the flooded vessel and assisted the crew of five in pumping off water. With the 22-foot recreational vessel Big Noodle no longer in danger of sinking, the Station Valdez boat crew towed the now disabled vessel into port.

July 2 – Coast Guard Cutter Liberty crewmembers terminated the voyage of a fishing vessel 33 miles from Sitka due to a lack of survival suits aboard. The crew of the vessel was directed to return to port and acquire the necessary number of survival suits to correct the discrepancy. Although safety gear is required throughout the nation, the frigid waters of Alaska make items like survival suits especially important.

July 3 – An Air Station Sitka MH-60 Jayhawk helicopter crew medevaced an ailing passenger from a cruise ship about four miles west of Dall Island, near the south side of Prince of Wales Island, Tuesday. A 17th Coast Guard District watchstander received a report of a 54-year-old male aboard the cruise ship Celebrity Century suffering from heart complications and difficulty breathing. After launching, the Jayhawk crew arrived on scene and safely hoisted the patient. The patient was reported in stable condition upon transfer to emergency medical personnel in Sitka.

July 3 – A Coast Guard Air Station Sitka MH-60 Jayhawk helicopter crew medevaced a 54-year-old passenger from a cruise ship near Prince of Wales Island Tuesday. The patient was reportedly suffering from breathing and heart complications. After safely hoisting the man from the cruise ship, the aircrew transported him to emergency medical personnel in Sitka. The patient was listed in stable condition at the time of the transfer.

July 4 – Coast Guard Station Juneau boat crews and an Air Station Sitka MH-60 Jayhawk helicopter crew were launched to aid in the search for a person in the water 25 miles north of Juneau Wednesday morning. A crewmember of the vessel fell overboard while trying to remove fishing gear from the propeller. The person in the water was reportedly wearing green rain gear and no flotation device. The search was suspended late Wednesday afternoon after a 60-square-mile search was conducted in the area.