Scientists Expect to Find New Species During First Chukchi Sea Trawl Survey
By Stephanie Joyce
Monday, August 13 2012
The first comprehensive survey of the Chukchi Sea ecosystem got underway last week. Scientists will spend the next month collecting samples and cataloguing life in the northern waters. The 143-foot Alaska Knight is normally a commercial trawler, but for this month, it’s moonlighting as a scientific research vessel - with all of the accompanying baggage. “There’s coolers upon coolers upon coolers and buckets upon buckets upon buckets all over this boat at the moment," says Lyle Britt, a federal fisheries biologist. He’s one of six scientists heading up to the Chukchi Sea aboard the Alaska Knight. His team is doing bottom trawl surveys - dragging a.... http://kucb.org/news/article/scientists-expect-to-find-new-species-during-first-chukchi-sea-trawl-survey/

On Primary Ballot, Coastal Zone Management Proposition is a Battleground
Ballot Measure 2 is most controversial proposition on the August 28 ballot
By Bill McAllister
By Brendan Joel Kelley
Story Created: Aug 13, 2012 at 6:03 PM AKDT
Story Updated: Aug 13, 2012 at 7:41 PM AKDT
ANCHORAGE - You've probably seen and heard all the ads.
In the debate over Ballot Measure 2, one side so far has drowned out the other – “Vote No on 2” has been running commercials against the implementation of a new coastal zone management program, though the ads leave some ambiguity for voters wondering exactly why they should vote against it..... http://www.ktva.com/home/top-stories/On-Primary-Ballot-Coastal-Zone-Management-Proposition-is-a-Battleground-166061756.html

SKUNKED
Poor salmon returns raise concern for resource
Posted: Monday, August 13, 2012 7:40 pm
By JEREMIAH BARTZ Frontiersman.com | 1 comment
MAT-SU — Some may still feel like a bad day of fishing beats a good day at work. But in a summer stocked full of bad salmon fishing days, some Mat-Su business operators would love to reel in a good day at the office. With a steady line of restrictions and closures in local salmon fisheries, it’s not only anglers who are feeling skunked. Businesses that cater to sportfishing are suffering. The complete closure of coho salmon fishing on the Little Susitna River, effective last Friday, is the latest restriction announced by the Alaska Department of Fish and Game that impacts the Mat-Su Valley. Poor returns are again to blame, just as they were for the restrictions and ultimate closure of the local king salmon fisheries earlier this summer. Rival user groups continue to debate the reasons for poor.... http://www.frontiersman.com/news/poor-salmon-returns-raise-concern-for-resource/article_bbb7d978-e5c1-11e1-aca4-001a4bcf887a.html

Suspended fed scientist was investigated for conflicts in Arctic research
Published: August 13th, 2012 09:12 AM
Last Modified: August 13th, 2012 09:41 AM
Alaska-based federal Arctic scientist Charles Monnett was investigated by the federal government for perceived conflicts of interest in his job reviewing and overseeing research contracts, according to documents obtained by the journal Nature through the Freedom of Information Act. The government has told Public Employees for Environmental Responsibility, a watchdog group assisting Monnett's defense, that.... http://www.adn.com/2012/08/13/2586557/suspended-fed-scientist-was-investigated.html

State: Despite Mile-Long Sheen, Amount Of Oil ‘Very Small’
By Ed Ronco, KCAW - Sitka | August 13, 2012 - 10:08 am
A response team is in Slocum Arm, north of Sitka, tending to oil leaking from a seine boat. The 50-foot Evening Star sank while fishing on August 2nd. The vessel is about 40 miles northwest of Sitka, along the southwestern part of Chichagof Island. The vessel reportedly had 1,000 gallons of diesel aboard. A mile-long sheen was seen on Tuesday, but state environmental officials say the... http://www.alaskapublic.org/2012/08/13/state-despite-mile-long-sheen-amount-of-oil-%E2%80%98very-small%E2%80%99/ 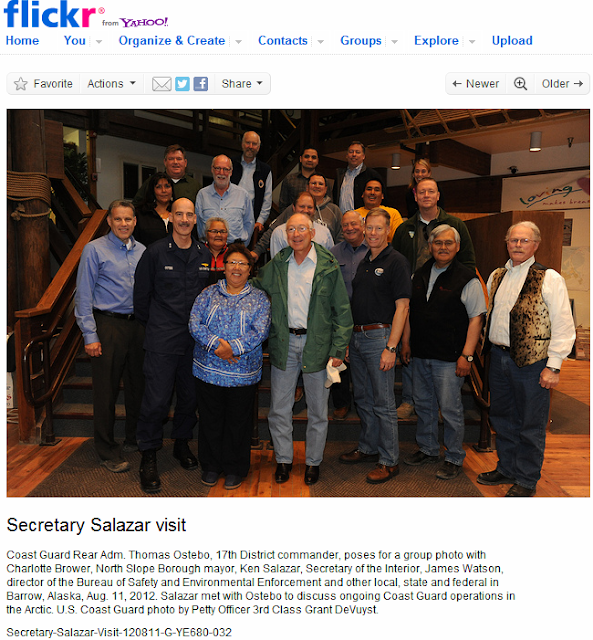 Thank you follower number 30,000! I never would have guessed that I'd ever have so many faithful followers, fans and friends! Thank You All!
— Mike Fourtner (@MikeFourtner) August 14, 2012