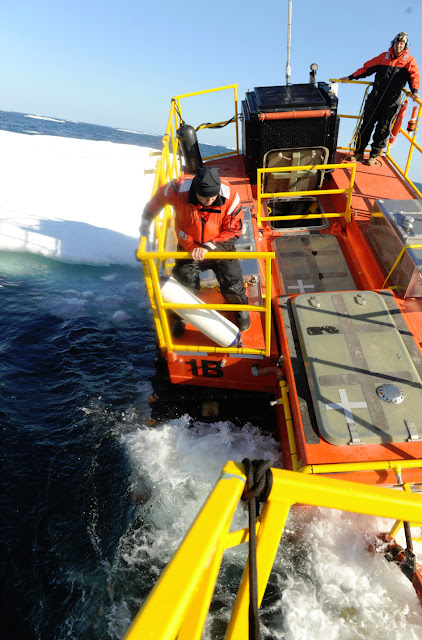 USCG D17 External Affairs - BARROW, Alaska – Personnel from the 17th Coast Guard District and the Coast Guard Office of Boat Forces are assisting the Coast Guard Research and Development Center in conducting evaluations on some Arctic craft in Barrow Aug. 13-17, 2012.


As the Coast Guard’s role above the Arctic Circle expands, boats, or vessels smaller than 65-feet long, capable of operating in icy conditions are becoming necessary to accomplish parts of the Coast Guard’s statutory missions.

“We’re looking for a craft that is capable of transiting through and over ice and ice-strewn water,” said Rich Hansen, a Branch Chief at the Coast Guard Research and Development Center, in New London, Conn. “We’re also looking for shallow water capability, and the ability to operate in areas with minimal infrastructure. Ideally we would like to find something that could be flown in on Coast Guard aircraft in the event of an incident requiring our response.”

The Center solicited industry participation through a Broad Agency Announcement earlier this year.


“This demonstration is only evaluating potential technologies that may provide improved capabilities in the arctic environment,” said Hansen. “The information gained will be used by the Coast Guard to explore its options for operating in this challenging environment.”

At this time there is not an active acquisition activity for either of the craft being observed.