Coast Guard search and rescue watchstanders received a satellite emergency signal late this Thursday afternoon, while simultaneously receiving reports of a mayday broadcast from a plane reporting that they had crashed. 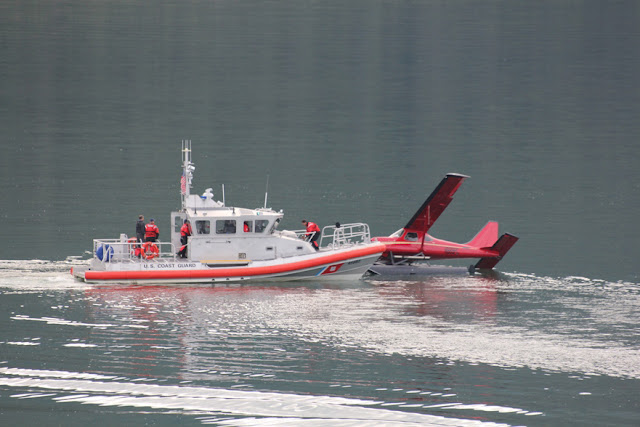 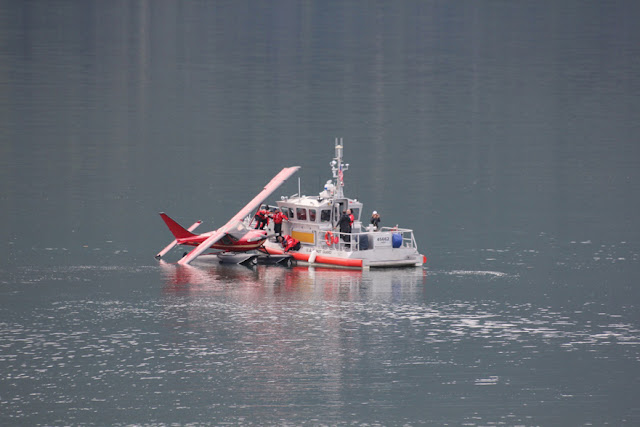 The crews of the cruise ship Carnival Spirit and an Allen Marine tour boat responded to the downed plane in the waters of Tracy Arm south of Juneau, and found two people sitting on one of the floats of the partially submerged plane. The responding good Samaritans remained with the two people until a Coast Guard Station Juneau 45-foot Response Boat - Medium crew arrived on scene within an hour and rescued the individuals. Both were taken to Juneau with no reported injuries.

The plane, a small red and yellow Glasair, reportedly crashed when one of its two floats failed while landing.

Earlier that day, Coast Guard watchstanders received a request from Alaska State Troopers to help rescue five hikers who were stranded more than 4,500 feet up Mount Bassie near Sitka.

A Coast Guard Air Station Sitka MH-60 Jayhawk helicopter crew was launched to assess the situation and see if they could safely hoist the five people from the mountain. If a direct rescue was not possible, plans were developed with Sitka Mountain Rescue to transport a team to the base of the mountain and conduct a ground rescue.

The Jayhawk crew arrived on scene with the hikers around 1:45 p.m. where they found the people on a ridge in a location where a hoist rescue was not possible. However, the crew was able to talk with the hikers via radio and direct them to another area where a rescue could be safely performed.

While the hikers changed locations, the helicopter crew returned to Sitka, refueled, and then returned to the mountain.

All five hikers were safely hoisted up from a ridge and transferred to Sitka at around 3:30 p.m.

“These two cases illustrate how adaptable our crews are to any situation where peoples lives are at stake,” said Scott Giard, a Sector Juneau Search and Rescue Controller. “Our crews with the help of other professionals like Sitka Mountain Rescue and the willingness of good Samaritans to respond are what make rescues such as these possible. Tonight due to the efforts or all responders, seven people are safe and able to return home to loved ones.”

The crashed plane was marked with a strobe light and the owner is responsible for making arrangements to salvage the aircraft. It was reportedly caring up to 18 gallons of fuel; however, no signs of pollution were reported.