Hooked Blog with more today >> Lost at Sea: The Man in the Fish Tote

Friday, September 7th, is a bad day on the ocean.

With the forecast calling for Southeast winds of 35 knots and 11-foot seas, the Nerka spends the morning trolling in the mouth of Gilmer Bay. We hadn’t expected to be fishing at all today. If we catch anything, we reason, they’ll be bonus fish, and we’ll already be safe in the harbor’s arms when the wind comes up. On Day 13 of a grueling trip, a relaxing afternoon on anchor sounds good.

We eat lunch on the pick shortly after the wind bares its teeth, but any further thought of relaxing whooshes overboard with the building gusts. By early afternoon, eight trollers cluster on the bay’s southern shelf, straining taut anchor lines. Our companions are 48-foot fiberglass and steel rigs, sturdy, seaworthy vessels. As seaworthy as any of us can be. With September’s onslaught of fall weather, no one wants to push their luck. Winner of the tough guy award, the final arrival drops his anchor at 3:00.

Whitecaps slam-dance between boats as the wind holds steady at 39 knots. The gusts are dragon’s breath, visibly rip-snorting through the bay. An elderly wooden troller, located several hours away behind St. Lazaria Island, begins taking on water, and one of our harbor mates drags anchor. As the captain naps, his boat shoots clear across the anchorage as if sail-powered, pausing a quarter-mile from the rocks. Another troller is charging over to alert him, when he wakes in time to avert disaster..... http://nerkasalmon.wordpress.com/2012/09/11/lost-at-sea-the-man-in-the-fish-tote/ 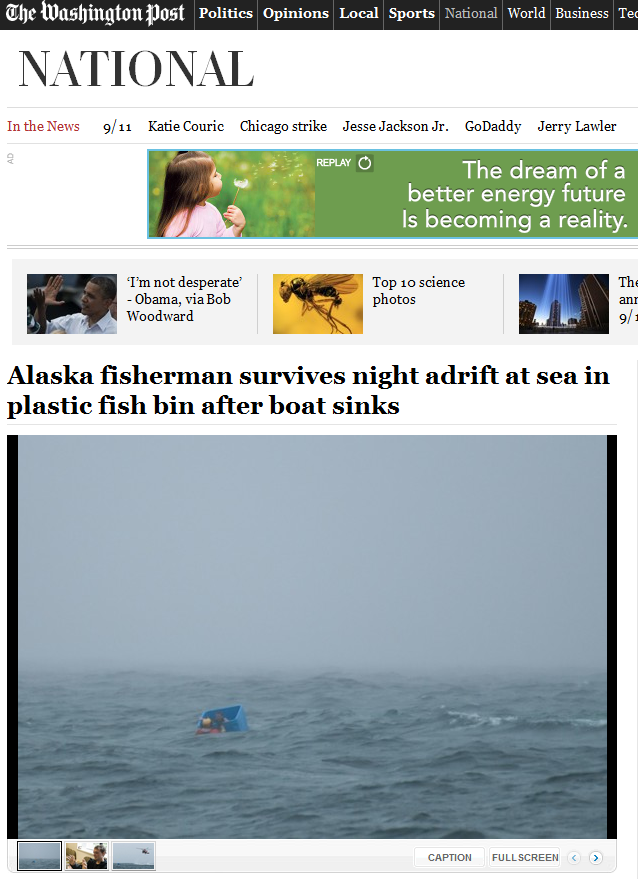 A 19-year-old fisherman was rescued off the coast of Alaska Saturday after spending more than 24 hours adrift in a 4-by-4 foot plastic fish crate.

Ryan Harris, of Sitka, Alaska, departed with his crewmate, 40-year-old Stonie “Mac” Huffman, Friday for a day of fishing aboard their 28-foot aluminum boat.  The men were about two miles offshore fishing for salmon when their boat began experiencing mechanical problems and they decided to head back to shore, according to the Daily Sitka Sentinel.

On the way back, the waters became choppy and their boat was slammed by an eight-foot wave.  The boat overturned and the men were thrown into the icy waters with no lifeboat, no life vests and no radios to call for help.

The pair did have empty fish totes onboard that they found in the water and.... http://abcnews.go.com/blogs/headlines/2012/09/fisherman-survives-day-at-sea-in-crate/