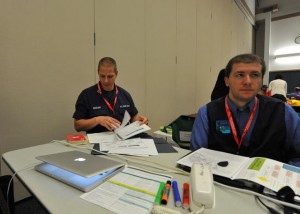 PIAT, an element of the National Strike Force, co-located with the National Strike Force Coordination Center in Elizabeth City, North Carolina, conducted training in Juneau, Anchorage and Ketchikan.  The last time PIAT was in Alaska was in 2004, when the motor vessel Selendang Ayu ran aground and a Coast Guard MH-60 Jayhawk helicopter crashed due to a rogue wave hitting the aircraft while the crew was attempting to recover survivors from the stranded vessel.

The main mission of PIAT is to provide public information support to emergency responders during events such as hurricanes, oil spills, hazardous material releases and other types of disasters.

According to Petty Officer 2nd Class Jaclyn Young, an instructor with PIAT, the training educates personnel on how to manage their media relations program during an incident,

Additionally, the training proved to be a useful tool for Coast Guard officers who are public information officers at their current station.

“Being new to the public affairs world, a lot of questions sprang up on how I would fit into the Information Command Structure,” said Lt. Ryan Erickson, Chief of incident management for the Coast Guard Sector Juneau.  The training provided a better understanding of my roles and responsibilities as an information officer, he added.

Public information support is not a new concept for the Coast Guard and during their weeklong trip to Alaska; the PIAT training team trained more than 70 federal, state, foreign and local members on the importance of understanding risk communications, the incident command structure and how to manage a joint information center.