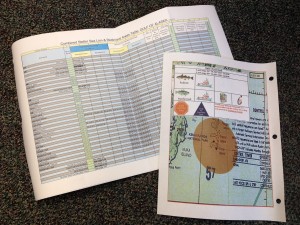 The award recognized the work done by Coast Guard Chief Petty Officer Alan Kinman, an instructor at the NPRFTC, and his staff to update a job aid and make it more user-friendly.

“My team worked hard for several months on this and hit it out of the park,” said Kinman. “What was innovative for us was the new numbering system we created for this entire area in Alaska and going to a pictograph depiction of the rules that takes the headache out of the job for the pilots and the instructors.”

The NPRFTC staff began their modifications after noticing that the previous job aids were poorly designed and hard for Coast Guard pilots to read when patrolling and enforcing federal regulations at the 140 different Steller sea lion rookeries throughout the state.

The new job aid allows a user to glance down and rapidly determine if fishing vessels are operating too close to the rookeries and violating federal regulations, said Kinman.

This innovative effort not only produced a superior job aid tool for use in the field, it also makes the workload easier on the NPRFTC instructors by eliminating the need for a separate Steller sea lion training class and allowed the information to be incorporated and taught within other NPRFTC courses.

According to Kinman, the new job aid has not only improved the student’s knowledge about federal regulations for individual sites. It also improved their test scores and retention of information as well.

“We test the students at the end of the class,” said Kinman. “For each site it would take at least three minutes and they ran about a 75 percent accuracy rate finding, identifying the regulations and then applying the appropriate footnotes to each site. Now students turn to the page that represents that site and they come up with 100 percent accuracy in about 10 seconds.”

The new job aid has made a significant contribution to Coast Guard operations by facilitating rapid interpretation of regulations in a highly visual format that does not require an aviator to choose between safety and mission, streamlining the instruction process and improving the accuracy rate for violation determinations there by furthering the protection of Steller sea lions.