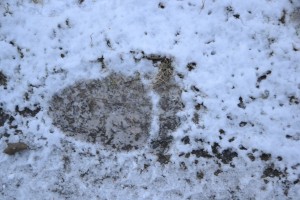 A bear print left by a Kodiak brown bear near the Coast Guard Communications Station Nov. 18, 2012, in Kodiak, Alaska. Kodiak Island is home to a large brown bear population that is very active in the vicinity of Communications Station Kodiak. U.S. Coast Guard photo by Seaman Justin Hergert.
Recently a brown bear at Communications Station Kodiak caused enough damage to disable a communications antenna for the winter season, until repairs can be made in the spring. The cost to repair the cable is estimated in the thousands of dollars. Intensive repairs like this are usually made by the engineering department and are reserved for the spring and summer months when weather conditions are less problematic.
There are several opinions about why the bears are attracted to the antenna cables. It seems that anything unnatural, they bite to investigate according to Petty Officer 1st Class Aaron Nahikan, an electronics technician at COMMSTA. Some of the crew believes the bears are attracted to the hissing sound of the air flowing through the cables, and others believe they can sense the electricity inside, as the bites occur on both control cables and transmission lines. Both theories seem plausible, as brown bears are known to be curious about anything that they think could be food.
COMMSTA Kodiak’s mission is to provide rapid, reliable and secure communications to the maritime public, Coast Guard forces, and other government agencies. COMMSTA is comprised of engineering crew and operational crews. The operations side, consisting of operational specialists, is trained to receive calls over HF radio frequencies and work with the command centers to arrange for the closest Coast Guard unit to respond. They diligently maintain a 24-hour radio watch 365 days a year. 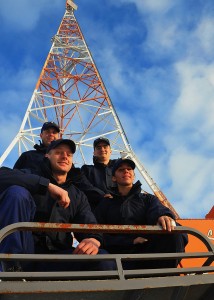 Petty Officer 1st Class Aaron Nahikian and Petty Officer 3rd Class Cody Beauford, (both left) electronics technicians, Seaman Aaron Loggins, and Seaman Sara Lepape, take a moment for a photo after investigating damage to a control cable for an antenna at the antenna field adjacent to Communications Station Kodiak, Alaska, Tuesday, Dec. 4, 2012. The crew inspect the antennas daily to prevent discrepancies resulting from bears chewing on the cables. U.S. Coast Guard photo by Seaman Justin Hergert.
The engineering side, consisting of electronics technicians and information systems technicians, is responsible for maintaining the approximately 30 transmission antennas and all the cable and ground hardware included. They conduct daily rounds of towers and cable at all the transmission sites to inspect for damage and maintain the grounds. When snowfall accumulates they often use a snowcat, a fully enclosed tracked vehicle, to travel through the snowy Kodiak mountains.
“The members here are fully qualified to operate heavy equipment such as the snow cat, tractors and dozers, which is a very unique job in the Coast Guard,” said Nahikan. “The COMMSTA also has remote sites in St. Paul, Cold Bay, Point Higgins and Shemya Island. Keeping constant communication and being able to answer the call when needed is crucial to the COMMSTA’s mission. This can be a daunting task when facing the environment and weather patterns in Kodiak.
“Keeping all the equipment functional is a daily fight here at COMMSTA,” Nahikan said.
Furthermore, just as the weather is a constant battle for COMMSTA, the Kodiak brown bears and the damage they can cause can be equally as challenging. Most of the damage by brown bears occurs at the transmission sites. These bears bite and puncture the cables, which allow air to leak out and moisture in. These cables constantly circulate air within their insulation to keep lines dry and preventing corrosion. Damage by bears can occur as often as once or twice a month during the winter and fall, and once a week in the spring and summer months when the bears are most active.
Bear interactions in Kodiak are very common as the Coast Guard shares the environment and its resources. The COMMSTA works with the Coast Guard Police Department and the local U.S Fish and Wildlife representatives to report and track bear activity. It is important for residents and visitors to remain bear aware when out and about on Kodiak Island.