Kulluk separates from tow vessels in the Gulf of Alaska

Once again, the Coast Guard reports that the lines connecting the Royal Dutch Shell drill unit Kulluk to its tow vessels have separated, leaving responders hoping to re-establish a connection Sunday evening. The Kulluk, which has no propulsion system of its own, had been connected to the Shell tow vessels Aiviq and Nanuq on Sunday morning, but was again at the mercy of rough seas Sunday afternoon.

Numerous other vessels were on scene, including the tug boat Alert, which arrived earlier in the day.

"The crew is evaluating all options for reconnecting with the Kulluk," the Coast Guard said.

The Alaska Department of Environmental Conservation reports that the Aiviq and Nanuq actually lost their tow of the Kulluk at about 2 p.m. on...... http://www.alaskadispatch.com/article/shell-drill-rig-separates-tow-vessels-again-gulf-alaska 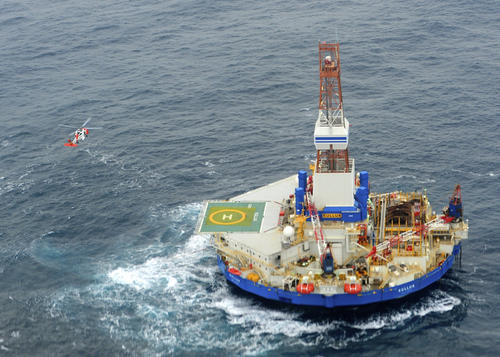 CGAS Kodiak rescue of Kulluk crew
A Coast Guard MH-60 Jayhawk helicopter crew from Air Station Kodiak conducts hoists of the second of 18 crewmen from the mobile drilling unit Kulluk in 15 to 20-foot seas 80 miles southwest of Kodiak City Saturday, Dec. 29, 2012. The Coast Guard was prompted to rescue the crew of the Kulluk after there were porblems with the tow Thursday and the weather conditions began to deteriorate. U.S. Coast Guard photo by Petty Officer 1st Class Sara Francis. 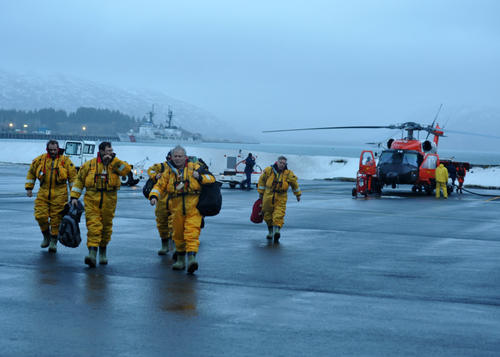 Kulluk crew rescue Alaska
Crewmembers of the mobile drilling unit Kulluk arrive safely at Air Station Kodiak after being airlifted by a Coast Guard MH-60 Jayhawk helicopter crew from the vessel 80 miles southwest of Kodiak, Saturday, Dec. 28, 2012. A total of 18 crewmembers of the mobile drilling unit were airlifted to safety after they suffered issues and setbacks with the tug and tow. U.S. Coast Guard photo by Petty Officer 3rd Class Jonathan Klingenberg.