Harvest Allocations for Drifters and Setnetters in Bristol Bay Will Remain Unchanged
01/02/13
During last month’s meeting the Alaska Board of Fisheries turned down an effort to make major changes to the allocation percentages for drifters and setnetters in Bristol Bay’s massive commercial sockeye fishery. KDLG’s Mike Mason has the story. (3:11).... http://www.kdlg.org/news/archive.php?id=2413

Changes in the Use of Herring Spawn on Kelp in the Togiak Area
01/02/13
The subsistence foods used in southwest and western Alaska vary depending on location. Across much of the region salmon is a staple of a subsistence diet while users in other areas rely heavily on moose and caribou. The Togiak area is somewhat unique in that many subsistence users rely on herring spawn on kelp to supplement their diet. Some new research about the use of herring spawn on kelp was outlined during last month’s Alaska Board of Fisheries meeting. KDLG’s Mike Mason covered the meeting and filed this report. (3:42).... http://www.kdlg.org/news/archive.php?id=2412

Ambitious Alberta-Alaska rail link proposed
Posted: Wednesday, January 2, 2013 11:42 pm
Jeff Richardson
FAIRBANKS — A Canadian business group is proposing a railway link between Alberta and Alaska as a possible route for bringing landlocked oil to market, but some of the details have been met with skepticism by trans-Alaska oil pipeline officials. The proposal, being pushed by a business consortium called G Seven Generations, would connect Fort McMurray, Alberta, and Delta Junction with a rail line. G7G is seeking $10 million from the Alberta government to help fund a $40 million feasibility study, according to an article in Wednesday’s Edmonton Journal..... http://www.newsminer.com/news/local_news/article_809265e0-5581-11e2-863c-0019bb30f31a.html 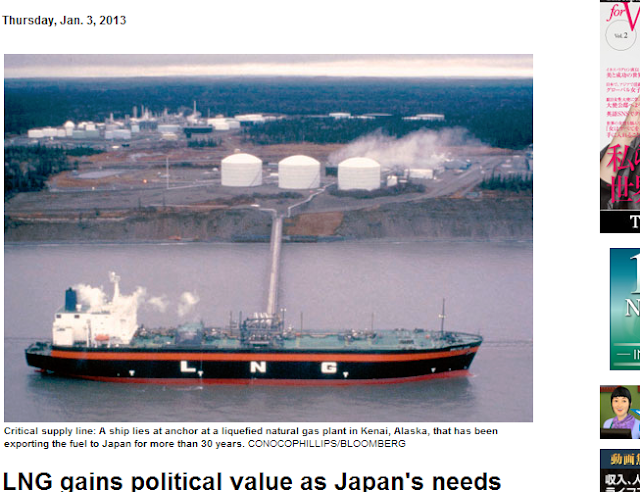 By ERIC JOHNSTON
Staff writer - Japan Times
OSAKA — With Japan's nuclear power future clouded by discoveries of active faults near atomic plants in Fukui and Aomori prefectures, liquefied natural gas has become a critical resource and an area of great potential for strengthening relations with the United States. From the frozen wilderness of Alaska's North Slope to Louisiana and the Gulf Coast, American LNG reserves have increasingly drawn interest from Japan since the March 2011 megaquake and tsunami. With all but two of the nation's.... http://www.japantimes.co.jp/text/nn20130103f1.html

DC/Florida: $150 million in fisheries aid put off until mid-January
January 03, 2013 12:00 AM
A bill that will provide funding for communities affected by Hurricane Sandy and that also includes $150 million for fisheries disaster relief will now be voted on in two parts, leaving the fate of funds for local fishing grounds up in the air until Jan. 15, The Washington Post reported Wednesday. House leadership decided not to allow a vote on the bill, which had... http://www.southcoasttoday.com/apps/pbcs.dll/article?AID=/20130103/NEWS/301030345/-1/NEWS01


The Fishing Widow eBook Release on 6 January 2013! | A Diamond In The Dark akmarshall.com Check it out! #thefishingwidow please r/t
— A.K. Marshall (@jitterymoose) January 3, 2013


Got get some Xtra Tuf boots for AK..Everyone else had some, I don't want people to think I'm not from there....because I'm not #AlaskaNewbie
— Katie Millican (@AK_Echo) January 2, 2013


The State with the highest percentage of people who walk to work: Alaska
— OMG Facts (@OMGFacts) January 2, 2013