The Fishing Widow eBook Release Jan. 6, 2013 at 1pm Alaska Time (In Craig, Alaska and on the web)

January 03, 2013
Recently we heard about a ComFishy novel written by Alaskan author Amy Marshall. Title: The Fishing Widow. And to top it all off, we heard about it before the official book launch which is happening this Sunday at 1pm (Alaska Time)! A clip describing the novel according to Amy: "The Fishing Widow follows two main characters, Ethan Lindgren and Colin Claybaugh, two fishermen based in the fictional Port Saint Anne, Alaska, and both of whom are involved in the Sitka herring sac roe fishery."

To get the skinny on how and where to join Amy and her friends for the launch (in person in Craig, Alaska or on the web) bookmark the Facebook Event and watch the wall for details. For a sneak peek at what's inside the book grok the prologue she has up on her site now. Excerpt of the prologue and other related media attached below.
Check it out! HG


September 2006 Aboard Fairweather off the coast of Southeast Alaska 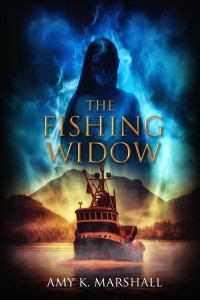 “Gall damn son of a ***!  Nathan, you ***!  What’re you doin’?” Matt screamed into the radio as he throttled back on Fairweather’s engines and cut the wheel hard to port.  Spray and rain washed across the wheelhouse windows as the seine boat shuddered across crests and troughs.  Matt’s brown eyes grew wide, his heart raced as Fairweather’s superstructure groaned under the strain of the sudden change of course.  Angry, slate grey water topped with white roared over the bow and Matt braced himself against the con as Fairweather slammed bow-first into a trough.  The wind shrieked in the wires. Unsecured objects crashed, sliding recklessly through the wheelhouse and the main cabin below.  Matt’s reaction came too late, and Fairweather pitched up, smashing broadside, into the boat that had loomed, suddenly, off her starboard beam.  Revelation.  Matt staggered, his hand tightening on the wheel as his 58’ foot seine boat rebounded away with a bone-crushing jolt. “Shit!” he swore again as he spun the wheel in a desperate attempt to shear away from the pitching seiner that rolled, lightless, in the storm beside him.

Below in the fo’c’sle of Matt’s boat, six deckhands were startled awake, four of them tumbling from their bunks upon impact. True sleep eluded them as the storm roared beyond more > http://www.akmarshall.com/the-fishing-widow-prologue/