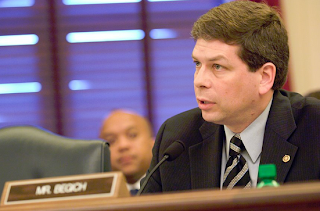 Senate.gov Feb 07 2013 - Genetically-engineered salmon known as “Frankenfish” would be banned under legislation introduced today by U.S. Sen. Mark Begich, Chairman of the Senate Subcommittee on Oceans, Atmosphere, Fisheries, and the Coast Guard. Begich, who has been leading the fight against GE salmon since he came to the Senate, is introducing two anti-Frankenfish measures today.

“Alaska has been supplying the world with nutritious salmon for decades,” Begich said. “We cannot afford to experiment with the world’s largest wild salmon stocks without the certainty that these fake fish won’t pose a serious environmental risk, especially to wild salmon and their habitat. I am introducing these bills to prevent against science experiments ending up on the plates of Alaska families.”

Late last year, Begich blasted the U.S. Food and Drug Administration (FDA) for their findings of “no significant impact” on the proposal from AquaBounty Technologies to produce a hybrid Atlantic salmon modified with a Chinook salmon growth gene and an antifreeze gene from an eel-like fish, the ocean pout. Begich expressed serious alarm at the announcement and believes the FDA lacks the expertise to make such a finding without a thorough review of its impact on ocean ecosystems.

Begich is concerned about the potential impacts of the release of GE salmon into the wild, whether by accident or negligence, as has been the history of other invasive species. The FDA reviewed the AquaBounty proposal not as a food product but as a veterinary drug. Despite the precedent-setting implications of being the first GE animal approved for human consumption, the FDA only considered its limited production, not the more widespread production which would surely follow federal approval.

“The potential that genetically engineered salmon might escape into the wild, interbreed with wild stocks, and compete with those stocks for food would be a disaster not only for wild salmon, but also for the broader ecosystems in which they live,” Begich said. “The FDA lacks the expertise to judge the impact of escaped Frankenfish on wild salmon stocks but these potential impacts must be understood before its production is allowed.”

Begich’s second bill would require any GE salmon product to be labeled as genetically engineered, a proposal the FDA has rebuffed.

“American consumers have a right to know what they are eating, especially if it was grown in a test tube,” he said. “I remain outraged the FDA has taken such a casual attitude toward our country’s food supply without considering other options. As chairman, I will be taking steps to protect our families and our coastal communities who rely on healthy salmon populations.”

Begich and other opponents of GE fish fear that GE salmon will compromise the health of American consumers who, if the FDA approves, may unwittingly purchase or eat a genetically modified piece of fish and feed it to their families.

In addition to introducing the two bills today, Begich led an effort by seven senators who urged the FDA to extend the public comment period and allow more time for the public to weigh in on its draft Environmental Assessment (EA) of GE salmon. He is also leading other senators in drafting a formal response to the draft FDA action.