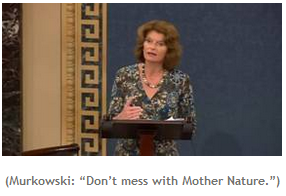 “We have scientists splicing fish DNA with an antifreeze-like chemical compound and considering feeding that to Americans,” said Murkowski.  “That kind of idea didn't work out so well in ‘Jurassic Park’ and I don’t think we should be going down that dangerous road with a perfect natural brain food like salmon.  We also shouldn't imperil a fishery with an unknown that could create doubts about the entire industry.  All four of these bills are designed to fight the billion dollar threats facing our fish.”

Senator Murkowski joined Senator Mark Begich on two bills. One would make it illegal to sell, possess, transport or purchase GE salmon in the United States unless and until the NOAA approval process makes absolutely sure there is no harmful impact on  the environment – a claim that Murkowski is extremely dubious about, challenging the Food and Drug Administration on the floor of the Senate and through multiple legislative means. (View clips below) The other bill defies the FDA’s stance against clearly labeling Frankenfish, requiring that GE salmon be clearly labeled and identified so that consumers can have full faith in natural salmon and know the difference on grocery shelves so they can be sure they are purchasing the real thing.

Senator Murkowski also joined her colleague Senator Jay Rockefeller (D-WV) in introducing the Pirate Fishing Elimination Act, an effort to crack down on illegal fishing operations harming America’s fisheries.  The bill would bar ships who engage in pirate fishing from U.S. ports altogether, as well as enacting stiff penalties for any businesses or groups in America that support illegal, unreported and unregulated fishing (IUU).  Each year illegal fishing produces between 11 and 26 million tons of seafood, resulting in economic losses with a global value of between $10 and $23 billion. IUU fishing for crab in Russia has had an adverse impact on Alaska crab fishermen by disrupting the market and lowering prices. Senators Murkowski and Rockefeller also filed the International Fisheries Stewardship and Enforcement Act today, to strengthen the international fight against illegal fishing by integrating policies for maximum effect.