March 19, 2013
Statement of the Chairman and Ranking Member of the Committee on Ethics Regarding Representative Don Young 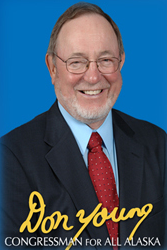 In accordance with House Rule XI, clause 3 and Committee Rules 10(a)(2) and 18, the Committee on Ethics (Committee) unanimously voted on February 26, 2013, to establish an Investigative Subcommittee.  Pursuant to the Committee’s action, the Investigative Subcommittee shall have jurisdiction to determine whether Representative Don Young violated the Code of Official Conduct or any law, rule, regulation, or other applicable standard of conduct in the performance of his duties or the discharge of his responsibilities, with respect to allegations that he, or persons acting on his behalf, improperly obtained, received, or accepted gifts, improperly used official resources or campaign funds for personal purposes, failed to report certain gifts on his annual Financial Disclosure Statements, and made false statements to federal officials.
The Committee has determined to take this action based upon a discretionary review of the allegations, as well as evidence obtained pursuant to Committee Rule 18(a), authorized by the Chairman and Ranking Member of the Committee during the 111th and 112th Congresses.  During the course of the Committee’s investigation, a portion of which was initially requested by Representative Young, the Committee received a referral from the Department of Justice regarding Representative Young’s expenses and travel costs for certain trips which were the subject of the Committee’s ongoing review.  The Committee has reviewed the referral without prejudice or presumptions as to the merit of the allegations.
The Committee notes that the mere fact of establishing an Investigative Subcommittee does not itself indicate that any violation has occurred.
The Honorable Patrick Meehan will serve as the Chair of the Investigative Subcommittee, and the Honorable Michael E. Capuano will serve as the Ranking Member.  The other two members of the Investigative Subcommittee are the Honorable William M. “Mac” Thornberry and the Honorable William Keating.  No other public comment will be made on this matter except in accordance with Committee rules.
News: House Ethics Committee launches probes of Rob Andrews, Don Young (no paywall yet)
Posted by Ed O'Keefe on March 19, 2013 at 12:00 pm
The House Ethics Committee plans to launch separate formal investigations of Reps. Robert E. Andrews (D-N.J.) and Don Young (R-Alaska), continuing probes into long-simmering accusations against both lawmakers.
In separate statements, the panel said Tuesday that it is empaneling two investigative subcommittees to review the allegations.
Andrews has faced allegations that he violated House rules and federal law by using campaign funds to pay for personal trips to Scotland and Los Angeles and by using a graduation party for his daughter to raise campaign cash.
A report released last year detailed how in May 2011 Andrews initially used personal funds  http://www.washingtonpost.com/blogs/post-politics/wp/2013/03/19/ethics-committee-launches-probes-of-rob-andrews-don-young/

Sat down with #AK Public Radio Network’s @pgranitz today to discuss my work in Congress over the past 40 years. twitter.com/repdonyoung/st…
— Rep. Don Young (@repdonyoung) March 18, 2013