Yesterday, March 28, the second opening of the Sitka Sound herring sac roe fishery occurred from 2:00  p.m. until 5:30 p.m. in an large area of northern Sitka Sound north of 57° 07.00’N. latitude, south of 57° 10.95’ N. latitude, and east of a line from the northernmost tip of Crow Island to the southeasternmost tip of Kresta Point, including all waters of Katlian Bay. The preliminary harvest for this opening was 3,600 tons. On March 27, approximately 2,100 tons were harvested for a total harvest to date of 5,700 tons.

The first spawn was recorded during yesterday’s aerial survey with a total of 2.2 nautical miles of intense spawning mostly on the south and east sides on Kasiana Island with spawn also starting on the Apple Islands. Large numbers of sea lions and whales were seen among the rocks and smaller islands south of Kasiana and Middle Islands. Whales were also seen widely dispersed around northern Sitka Sound. During the aerial survey herring schools could be seen south of Sitka in Crescent Bay and Jamestown Bay and north of Sitka schools were seen in Eastern Bay and Katlian Bay.

The plan for today is to stand down on harvesting to allow for processing and rotation of tenders in preparation for further harvests. The R/V Kestrel will survey Salisbury Sound this morning and an aerial survey will be conducted to monitor progression of spawn and herring distribution. The department will be on the VHF radio at 2:00 p.m., today, to provide an informational update and discuss plans for tomorrow. 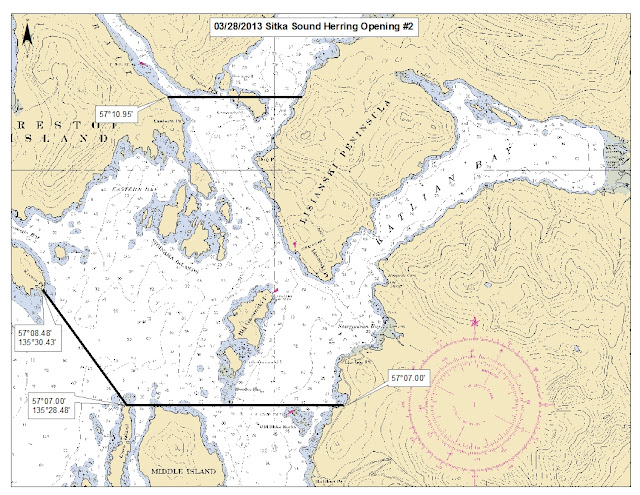