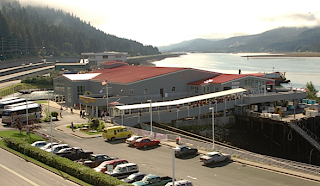 Posted: April 2, 2013 - 8:01pm
Updated: April 3, 2013 - 12:03am
By EMILY RUSSO MILLER
JUNEAU EMPIRE
Juneau salmon hatchery Douglas Island Pink & Chum recently made its last loan payment to the state of Alaska, marking an end to 33 years of debt acquired in starting and operating the facility. Since 1987, DIPAC has repaid a total of $23 million in loans, plus $19 million in interest to the state, for a combined total of more than $42 million, according to DIPAC Executive Director...... http://juneauempire.com/local/2013-04-02/dipac-celebrates-repayment-42-million-loan-state

House bycatch resolution a casualty of Cook Inlet divisions
MOLLY DISCHNER
Apr 3, 2013 - 12:33 AM
The Cook Inlet fish wars killed an effort in the Alaska House to ask the North Pacific Fishery Management Council to address king salmon bycatch in the Gulf of Alaska and Bering Sea. The council manages fisheries in federal waters offshore from Alaska, while the state is responsible for most salmon management, as well as in-river and near-shore fisheries. House Resolution 5 would have sent a letter urging the council to reduce king bycatch in those trawl fleets by setting new limits or lowering the existing ones, as necessary. That came out of the.... http://www.alaskajournal.com/Blog-Fish-Bytes/Blogs-2013/House-bycatch-bill-a-casualty-of-Cook-Inlet-divisions/

WEDNESDAY, APRIL 3, 2013
48 hours in Anchorage
The North Pacific Fishery Management Council convenes today for a meeting expected to last until Tuesday. That's a long time to talk fish, but it's normal for the council, which holds about five lengthy meetings a year. Most are held in Alaska, but.... http://deckboss.blogspot.com/2013/04/48-hours-in-anchorage.html

Hatch, door monitors now available; slack tanks and lazarette up next
April 2, 2013 by admin
Fish Radio
April 3, 2013
More than half of all fishing fatalities come from vessels going down. For example, the sinkings of the Alaska Ranger and Katmai five years ago  where 12 men died both stemmed from flooding through open hatches. That highlighted the need for a system that provides immediate status of all openings aboard fishing boats.  To the rescue: a simple monitoring system on doors and hatches with inputs displayed in the wheelhouse. Cut: The hatch door monitor takes feeds back from the door sensors that separate water tight compartments in the bowels of the vessel. If the boat is experiencing flooding  the captain can look.... http://www.alaskafishradio.com/hatch-door-monitors-now-available-slack-tanks-and-lazarette-up-next/

Fish Factor
Crafting a plan to reduce bycatch by trawlers
By LAINE WELCH
April 02, 2013
SitNews - A new plan is being crafted by federal managers for Gulf of Alaska groundfish fisheries that will reduce bycatch by trawlers, and it will very likely result in a catch share plan. Now is the time for fishing residents to make sure the new program protects their access to local resources and sustains, instead of drains, their coastal communities. Currently, the plan includes trawlers in the Central Gulf and both trawl and pot cod gear in the Western Gulf.  “Catch share programs certainly can benefit the long term viability of the resource in a fishing community, but only if they are designed right and the long term health of the resource, the community and genuine bycatch.... http://www.sitnews.us/LaineWelch/040213_fish_factor.html

5:05 PM TUE APRIL 2, 2013
Outlook for Commercial Fishing in the Nushagak District
By MIKE MASON
This summer's commercial salmon fishery in the Nusahgak District could be a little different compared to previous years thanks to actions taken by the Board of Fish late last year. KDLG's Mike Mason has the details..... http://kdlg.org/post/outlook-commercial-fishing-nushagak-district

Begich named to US-China trade group
By Vicki Needham - 04/02/13 08:07 PM ET
A Democratic senator will head up a China policy group to push U.S. exports.
Sen. Mark Begich of Alaska was named chairman of the U.S.-China Inter-Parliamentary Group (IPG), a bipartisan Senate group aimed at improving relations between the United States and China.
Begich, who will serve for a two-year term, said his top priority is advancing trade between the two nations, especially for his home state.....http://thehill.com/blogs/on-the-money/economy/291563-begich-named-to-us-china-trade-group

Boeing might be on the hook for $100 million in cleanup costs
April 2, 2013 @ 6:03 pm (Updated: 6:08 am - 4/3/13 )
Fish is a staple in the Pacific Northwest.
Tourists get the fresh catch of the day from fish throwers at Pike Place Market. Restaurants get fish from the Bering Sea or Pacific Ocean. And there's plenty of seafood at most grocery stores. For some in Washington - tribal members, Asian Pacific Islanders and immigrant groups - their source of fish is area waters. "I see people fishing at Green Lake. I'm not sure I would eat fish from that lake," says Robert McClure. "The Duwamish River is certainly is very polluted. Many of the urban waterways have not been cleaned up to the point where you'd want to eat fish out of them." State environmental officials have known since the 1990s that some consumers of the local catch are dining on dangerous levels of toxic chemicals, yet they have not acted. McClure, founder of Seattle-based Investigate West, says part of the problem is a standard.... http://mynorthwest.com/646/2242666/Boeing-might-be-on-the-hook-for-100-million-in-cleanup-costs

Canada earns praise for tough position on Arctic shipping pollution
Canadian PressEye on the Arctic
April 2, 2013
Canada is winning a rare bit of environmental praise from the international community for its stance on pollution from shipping in Arctic waters. Documents obtained by The Canadian Press show Canada is pushing hard to outlaw the discharge of oily wastes or garbage anywhere in the North. Canada's proposal, during negotiations for a mandatory global shipping code in the Arctic, has won the support of several countries including... http://www.alaskadispatch.com/article/20130402/canada-earns-praise-tough-position-arctic-shipping-pollution


Props to @nfjes: It's time for Alaska fishermen...to stand up and fight for the state's brand. bit.ly/YtCnjH#alaskaway
— Scott Coughlin (@BeringFisherman) April 2, 2013


Any Tweeple here SoundClouding the ADF&G VHF updates for Herring in Togiak? @ US if so. Example frm in Sitka April 1 soundcloud.com/haulinggear/si…
— Hauling Gear #Alaska (@haulinggear) April 3, 2013


oregon plastic grocery ban .. not sure how I feel about that.WTF are you going to do when it's raining? Like paper bags but wet ones suck
— Harvester Crew (@theoceanharvest) April 3, 2013