The sole crewmember of the Amelia Rose controlled the flooding, with the help of a Coast Guard dewatering pump, repaired the vessel and returned to Cordova.

The helicopter crew arrived on-scene within 10 minutes and lowered a dewatering pump to the crew of the good Samaritan vessel New Wave, who transferred it to the operator of the Amelia Rose.

"Southern Alaska becomes a hotbed of fishing activity during the warmer months and maritime emergencies are much more common," said Chief Petty Officer Fredery Araujo, a Sector Anchorage watchstander. "Having a helicopter and crew forward-deployed to Cordova gives us another asset to use in an environment where every minute in a response counts."

This case marks the first emergency response operation for Coast Guard personnel deployed to the forward operating location in Cordova. 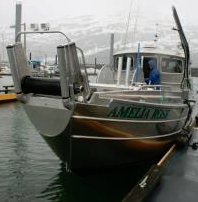