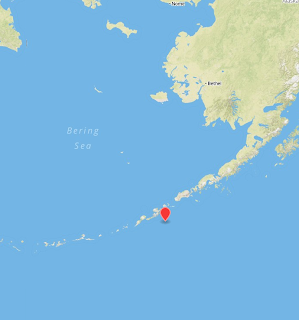 “We maintain a Coast Guard cutter in the region with a hoist capable helicopter to respond to emergency medical situations and vessel crews in distress because we know the need exists in these remote areas and capable resources are limited,” said Petty Officer 1st Class Francell Abbott, a watchstander at the Coast Guard 17th District command center. “This is the second medevac this crew has conducted in the Aleutians in less than a week.”

Coast Guard watchstanders received a request from Health Force Partners midday for a medevac of a man aboard the 218-foot catcher processor reportedly suffering from injuries sustained when a falling box of frozen fish struck him in the head. At the time of the request the vessel was 178 miles southeast of Dutch Harbor.

The Coast Guard duty flight surgeon concurred with the need for the medevac and the Coast Guard requested the Alaska Juris alter course to close the distance between the fishing vessel and the rescue helicopter crew. The crew of the Boutwell was directed to launch the embarked Dolphin helicopter crew to rendezvous with the Alaska Juris when they were less than 100 miles from Dutch Harbor and safely hoist the man aboard. A Coast Guard HC-130 Hercules airplane crew from the air station in Kodiak was also launched to provide cover, communications and maintain contact with the vessel until the helicopter crew’s arrival.

Weather conditions on scene at the time of the hoist were reportedly 28 mph winds with eight-foot seas and one-mile visibility, slightly improved from the time of the medevac request. The Boutwell is a 378-foot cutter based in San Diego.