July 13, 2013
Early Chum Bycatch Hampers Pollock Season
By Lauren Rosenthal
Friday, July 12 2013
A month into pollock B season, fishermen should be ramping up their efforts in the Bering Sea. But instead, they’re slowing down because of high chum salmon bycatch. Almost 20,000 chum have been taken incidentally since the season started on June 10. In the same period last year, the fleet caught about a tenth of that amount. But Krista Milani, a biologist with the National Marine Fisheries Service, says it's not uncommon to see high bycatch so early in the.... http://kucb.org/news/article/early-chum-bycatch-hampers-pollock-season/ 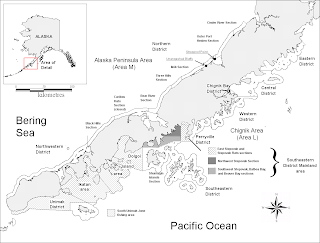 11:03 AM FRI JULY 12, 2013
By MIKE MASON
This year’s sockeye harvest in the North Peninsula Area just to the South of Bristol Bay has been very low as much of the area is closed to commercial fishing effort. KDLG’s Mike Mason has the story.... http://kdlg.org/post/very-low-harvests-and-limited-fishing-time-area-ms-north-peninsula
bullet 300 Villages: King Cove By Alex Duerre, APRN - Anchorage | July 12, 2013 - 4:00 pm
This week, we’re heading to the Alaska Peninsula community of King Cove. Della Trumble is the finance manager for King Cove Corporation..... http://www.alaskapublic.org/2013/07/12/300-villages-king-cove/

King Salmon Fishing Closures Extended on Kenai, Ninilchik Rivers
July 12, 2013|By Chris Klint | Channel 2 News
Share on emailShare on printShare on redditMore Sharing Services
ANCHORAGE, Alaska — With king salmon shortages continuing throughout Alaska, state officials are announcing that existing closures of the Kenai and Ninilchik rivers to sport fishing for kings have been extended. In statements issued Friday, Alaska Department of Fish and Game officials say no sport fishing on the Kenai River for kings will be allowed through July 31. The affected area covers waters from Fish and Game regulatory markers about 300 yards downstream of Slikok Creek’s mouth to Skilak Lake. “As of July 12, inseason information, including data from inriver..... http://articles.ktuu.com/2013-07-12/kenai-river_40542903

5:41 PM FRI JULY 12, 2013
Bristol Bay Fisheries Report for Friday, July 12
By MIKE MASON
The Friday, July 12th Bristol Bay Fisheries Report includes an update on the sunken tender Lone Star that has resulted in a fisheries closure in the Igushik area. The report also includes an overview of the setnet fishery in the Nushagak District and... http://www.kdlg.org/post/bristol-bay-fisheries-report-friday-july-12

Fish Factor
Federal Fishery Act Undergoing Reauthorization; Will dictate for generations the parameters for managing the fishing industry
By LAINE WELCH
July 12, 2013
SitNews - The rules that govern our nation’s fisheries are being retooled so it’s reassuring that Congress isn’t traveling in uncharted seas. Over 80 percent of Alaska’s fish landings hail come from federally managed waters, and the Magnuson-(Ted) Stevens Fishery Conservation and Management Act is the primary law ruling US fisheries. The Act is undergoing reauthorization for the first time in seven years. First enacted in 1976, the MSA “Americanized” the fisheries by booting out foreign fleets to beyond 200 miles from our shores. It created the nation’s eight fishery management councils, and its laws dictate.... http://www.sitnews.us/LaineWelch/071213_fish_factor.html

New Longliner "Northern Leader" to Begin Fishing in August
12:45 PM FRI JULY 12, 2013
By BEN MATHESON
One of the world’s biggest and most environmentally friendly cod longliners has begun its journey to Alaska.http://kdlg.org/post/new-longliner-northern-leader-begin-fishing-august
The 184 foot Northern Leader has left the shipyard, and after a few days of work in Seattle, it should....

Canadian delegation visits Ketchikan to promote port
by Marco Torres
July 12, 2013 1:28 PM
A delegation from Prince Rupert, British Columbia, attended a recent Greater Ketchikan Chamber of Commerce luncheon. They came for the Fourth of July festivities, and to speak about expansion projects taking place at their home port. Prince Rupert Mayor Jack Mussallem was accompanied by a group of officials from his town, as well as from the neighboring community of Port Edward. “We’ve got a lot in common, and we never forget that Ketchikan is our sister.... http://www.krbd.org/2013/07/12/canadian-delegation-visits-ketchikan-to-promote-port/

Future Looks Bleak for Cutter Storis
Jul 12, 2013
KETCHIKAN, Alaska (AP) — Alaskans hoping to save a former Coast Guard cutter as a museum have spoken to its new owner but say the odds are not good that the vessel can be preserved. Joe Geldhof of the Juneau-based Storis Museum and Educational Center says.... http://www.kmxt.org/index.php?option=com_content&amp;task=view&amp;id=4853


The Bering Sea is my office. Sometimes it feels good to wear a suit and tie to work! pic.twitter.com/w03Rc1yAX0
— Nick McGlashan (@NickMcGlashanCC) July 13, 2013