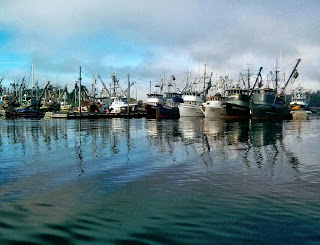 Posted 09/22/2013
by - Cordova Times Staff
Alaska's commercial salmon harvest by mid-September grew to nearly 269 million fish, far above the previous record of 221.9 million salmon in 2005. The pink harvest of 216,143 fish also was way beyond the previous record of 161 million humpies in 2005. Preliminary harvest totals published by the Alaska Department of Fish and Game also put the...... http://www.thecordovatimes.com/article/1338catch-reaches-nearly-269-million-fish

No more money for gillnet observers
by Matt Lichtenstein
September 20, 2013 8:27 am
It looks like Southeast Gillnetters will not be watched by marine mammal observers next year. That’s because there’s no more funding for the National Marine Fisheries Service program, which gathers data on interactions between the animals and the fishing fleet. NMFS contractors just wrapped-up a two-year observer effort in districts six and eight near Petersburg and Wrangell. The agency had planned to continue with other gillnet areas next year but that’s been put on hold indefinitely, according to....... http://www.kfsk.org/2013/09/20/no-more-money-for-gillnet-observers/

Kenai artist uses wax as her medium, fish as an inspiration
Posted: Saturday, September 21, 2013 7:42 am
Sara J. Hardan / Peninsula Clarion
KENAI, Alaska - Sitting with Marion Nelson and hearing her talk about making her encaustic art makes a person want to give it a try. Since her interest in the art began, she has had her art on display at the Gary L. Freeburg Gallery at Kenai Peninsula College and increasingly become more enamored with ordering the hard -to-find supplies and creating her wax works in her backyard studio. "It is a wonderful work space," she said. Nelson's hot and cold wax art is currently on display and for sale at Veronica's in Old Town Kenai. The walls are lined with many of Nelson's pieces, with color, lines, interesting designs and of course, salmon themes.... http://www.newsminer.com/news/alaska_news/kenai-artist-uses-wax-as-her-medium-fish-as-an/article_7bd490e8-22d4-11e3-9d9d-0019bb30f31a.html

Fresh to frozen food as Galena preps for winter
Posted: Sunday, September 22, 2013 12:00 am
Sam Friedman
FAIRBANKS — The food program that’s been serving Galena switched from hot food to frozen last week.
In the months since the record May flood, the Yukon River community of flood survivors and disaster assistance workers has had access to a community-wide mess hall, first in the town boarding school cafeteria and later at the community hall. That changed Monday when a joint state and federal program that provided the food switched to frozen meals. “The idea is to return people to their homes and have them preparing their own food again,” said Jeremy Zidek, a.... http://www.newsminer.com/news/local_news/fresh-to-frozen-food-as-galena-preps-for-winter/article_72ad8b7e-235a-11e3-a141-001a4bcf6878.html

Is warmer water harming salmon survival in the famous Kenai River?
Jenny NeymanRedoubt Reporter
September 21, 2013
When a baby is sick it can’t clearly communicate what’s wrong. So an examiner looks for symptoms to make a diagnosis -- collecting samples, measuring temperature, looking at coloration and lethargy, and checking on past illnesses to see if there’s been a flare-up. Environmental factors are noted, too. The patient is checked at the first sign of upset and monitored to see if the problem is endemic and worsening, or just a temporary disturbance. So it is with the cherished Kenai River. The health of what many consider Alaska’s premier.... http://www.alaskadispatch.com/article/20130921/warmer-water-harming-salmon-survival-famous-kenai-river

Does Anglo American's departure doom the Pebble prospect?
Alex DeMarban
September 21, 2013
Anglo American's pullout from Pebble is hardly a death knell for the promising but beleaguered mineral prospect in Southwest Alaska. But the move increases the chance of an important shift in the project, one that could lead to a less environmentally risky design than the massive, open-pit option that has sparked widespread opposition. That's the opinion, anyway, of Paul Metz, a longtime mineral economics expert from the University of Alaska Fairbanks. With Anglo departing, Rio Tinto is now the only major mining company invested in the project. Rio Tinto, headquartered in London, holds 19.8 percent of Northern Dynasty Minerals, the junior mining company from Canada that has long led efforts to develop the prospect.... http://www.alaskadispatch.com/article/20130921/does-anglo-americans-departure-doom-pebble-prospect

Paul Jenkins: Anglo American pulls out; is it because we're crazy?
Published: September 21, 2013 Updated 11 hours ago
By Paul Jenkins — comment
British mining giant Anglo American's abandoning the complicated, expensive and grindingly slow slog to develop the rich Pebble prospect in Southwest Alaska is understandable -- but you have to wonder how it must appear to other businesses and industries considering investments in Alaska. Anglo American, which poured more than $541 million into the Pebble effort, points to its deep backlog of projects waiting for development. It.... http://www.adn.com/2013/09/21/3085881/paul-jenkins-anglo-american-pulls.html

Petersburg AK, not a bad place to be stuck in. Here for the weekend before going back for more blackcod! pic.twitter.com/nYGsv4imJV
— Sierra Anderson (@sierraganderson) September 21, 2013

The latest iPhones are not as green as Apple would have you believe. http://t.co/3jrxDenvma
— WIRED (@WIRED) September 22, 2013

Come visit Marinexplore at #SEG2013 next week in Houston Placing marine #data at the service of your business? Visit booth 3411 in Hall B.
— Marinexplore (@marinexplore) September 22, 2013