North Pacific Council to offer information to Board of Fisheries
By Molly Dischner
Published: 2013.10.03 08:19 AM
The federal North Pacific Fishery Management Council agreed to provide information to the state’s Board of Fisheries at its upcoming meetings but not advocate for or against proposals. The Board of Fisheries is set to discuss state waters Pacific cod, scallop management and other issues that could intersect with federal management. That decision came after the council heard from the Alaska Department of Fish and Game, or ADFG, regarding the proposals that are on the table this year and could impact federal fisheries. Stakeholders weighed in on many of the proposals up for discussion........ http://www.alaskajournal.com/Blog-Fish-Bytes/Blogs-2013/North-Pacific-Council-to-offer-information-to-Board-of-Fisheries/

Feds say no to ESA protection for Kittlitz's murrelets
Posted 10/02/2013
by - Cordova Times Staff
U.S. Fish and Wildlife Service officials have denied federal protection sound for Kittlitz's murrelet, an Alaskan seabird whom an environmental group says is threatened by oil pollution, gillnets and shrinking glaciers. "It's tragic that our government has denied protection to this clearly endangered seabird, despite overwhelming scientific evidence of drastic population declines and escalating threats from climate change," Shaye Wolf, climate science director for the Center for Biological Diversity, said Oct. 2 . The Center first sought protection for the sea birds under the U.S. Endangered Species Act back in..... http://www.thecordovatimes.com/article/1340feds-say-no-to-esa-protection-for-kittlitzs

Salmon products recalled over botulism concern
Posted: Oct 02, 2013 10:19 AM AST Updated: Oct 02, 2013 10:21 AM AST
WASHINGTON, D.C. - Big Blue Fisheries is recalling ALL smoked products from all lots and codes, various sizes, in vacuum packages because the products may not have been properly cooked and have the potential to be contaminated with Clostridium botulinum, a bacterium which can cause life-threatening illness or death. Consumers are warned not to use the product even if it does not look..... http://www.wfmj.com/story/23591784/salmon-products-recalled-over-botulism-concern


Coast Guard Calls Off Search of Mystery Flare Source
Oct 02, 2013
Brianna Gibbs/KMXT
The Coast Guard suspended the active search of the source of a mysterious flare sighting near the vicinity of Long Island. Coast Guard Spokeswoman Sara Mooers said the search was called off just before 1 p.m. Wednesday when no source or signs of distress were reported..... http://www.kmxt.org/index.php?option=com_content&task=view&id=5104

U.S. Forest Service announces intent to modify Tongass National Forest management plan
October 01, 2013
(SitNews) Ketchikan, Alaska - Today the U.S. Forest Service announced that it will introduce a “modification” to the Tongass Land Management Plan that “among other things is expected to focus on identifying the timber base suitable to support a transition to young-growth management, in a way that supports the continued viability of the forest industry in Southeast Alaska, per the direction of Secretary of Agriculture Tom Vilsack.” The announcement also says the Forest Service will create.... http://www.sitnews.us/1013News/100113/100113_tongass_plan.html

RV Tiglax research season ends with sequestration
Summer studies focused on rat-free and cattle habitats, a volcano’s revegetation, returning a 1,000-year old body to Amchitka
By Naomi Klouda
Homer Tribune
The R/V Tiglax returned to port Friday after a four-month season that found birds flourishing since a rat eradication effort at Hawadax Island and inspected for rebounding vegetation on an island made barren by volcanic blast. Capt. Billy Pepper and his crew experienced a busy summer, hauling supplies and hosting 160 scientists and biologists. They traveled 16,400 miles, a distance equal to going back and forth across the U.S. five times. “We went down the Aleutian Chain and over to Sitka this time, no trips north to the Pribilof Islands this year,” Pepper said. “We had good weather. Everything went pretty.... http://homertribune.com/2013/10/research-season-ends-with-sequestration/

Columbia River: New rules have fishermen in a tangle
Gillnetters test new gear while waiting for lawsuit decision
Posted: Wednesday, October 2, 2013 9:51 am | Updated: 1:01 pm, Wed Oct 2, 2013.
By Ted Shorack
The Daily Astorian
Even with a chance at late returning coho salmon, few commercial gillnet fishermen will be out with tangle nets on the Columbia River in the next two weeks. The cost of testing the gear on the lower main stem comes out of fishermen’s pockets and many are skeptical if their investment will mean access to more fish in future years. Tangle nets are being tested although they are not new to the Columbia River. While the commercial fleet has adapted and tested commercial gear allowed by.... www.dailyastorian.com/free/new-rules-have-fishers-in-a-tangle/article_e377941e-2b82-11e3-a488-001a4bcf887a.html 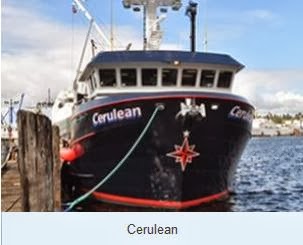 03 Oct 2013
Alan Haig-Brown caught up with Captain Josh Trosvig at the beginning of October as he was onboard his new longliner ‘Cerulean’, after leaving Alaska for fishing grounds in the Aleutian Island chain to the west of Dutch Harbor. Captain Trosvig reported that everything is running fine, and particularly noted the smooth running of the main engine with the propeller that he had tuned at..... http://www.worldfishing.net/news101/fish-catching/longlining/cerulean-ready-to-fish

Tesco's Fresh & Easy files for bankruptcy protection
UNITED STATES
Thursday, October 03, 2013, 05:00 (GMT + 9)
Fresh & Easy grocery chain has filed for Chapter 11 bankruptcy protection in the US Bankruptcy Court as a move in the restructuring process to complete its sale. The grocery chain, which is indergoing the process of trading hands from its present owner, Tesco, to Yucaipa Companies LLC., cited debt of USD 500 million to USD 1...http://fis.com/fis/worldnews/worldnews.asp?l=e&country=0&special=&monthyear=&day=&id=63908


Check out this article on #aquaculture, a hot button topic at this year's #ChefSummit13! http://t.co/7Ggc53WRCv @washingtonpost
— Chefs Collaborative (@chefscollab) October 2, 2013


Lower 48 Press calling the Alaska Permanent Fund an Oil fund. It's a fund at Wall Street not tied to price of oil. What else do they miss?
— Hauling Gear #Alaska (@haulinggear) October 3, 2013