Alaska Salmon Fishery Re-certified as Sustainable
US - Global seafood markets can continue to source MSC certified Alaska salmon and apply the MSC ecolabel, after a scientific, stakeholder-engaged, third-party assessment by Intertek Moody Marine (IMM) determined that 13 units of certification meet the MSC Standard as a sustainable and well-managed fishery. The Prince William Sound unit remains in assessment pending additional data. The 13 recertified units cover all other Alaska salmon. The Alaska salmon fishery was first certified in 2000 and re-certified in 2007. This third certification was undertaken by the.... http://www.thefishsite.com/fishnews/21774/alaska-salmon-fishery-recertified-as-sustainable


5:06 PM TUE NOVEMBER 12, 2013
Study: More Salmon May Survive The Ocean Than Previously Thought
By COURTNEY FLATT
When Columbia River salmon reach the ocean, they may swim off in different directions than previously thought. that could require new thinking on how many fish are surviving their journey to the sea. Up until now, most research counting juvenile salmon in the ocean has focused... http://nwpr.org/post/study-more-salmon-may-survive-ocean-previously-thought

Fishing Industry Fights Back Against Proposed Set-net Ban
By Alexandra Gutierrez, APRN - Juneau | November 12, 2013 - 5:37 pm
Fish politics can be messy stuff. They’re complicated; they’re emotional, and there’s a lot of money involved. Now that a group with ties to the sportfishing lobby is trying to put the existence of the Cook Inlet setnet fishery to a vote, fish politics are being taken to their messy extreme. When the initiative application was filed last week, commercial fishing groups were mostly quiet. Now, they’re issuing full-throated denunciations of the move to prohibit set-netting in urban areas. “Theatrics and political games” is how the United Fishermen of Alaska — or UFA — is describing it. The Alaska Salmon Alliance — another trade group..... http://www.alaskapublic.org/2013/11/12/fishing-industry-fights-back-against-proposed-set-net-ban/

Otter hunting increases
by Matt Lichtenstein
November 12, 2013 9:37 am
Southeast Alaska and the state as a whole has seen an apparent upswing in sea otter hunting in recent years. That’s according to numbers compiled by the US Fish and Wildlife Service which says this year will yield the biggest reported harvest on record for the marine mammals, which can only be hunted by native Alaskan’s from coastal communities. Matt Lichtenstein has a closer look at the Southeast Alaska numbers and some of the factors involved. US Fish and Wildlife Service records show that for all of 2012, Alaska native hunters in coastal communities across the state reported a total harvest of 1281 sea otters. 952 of those were from Southeast including Yakutat. So far, this year’s harvest is at least 1380 statewide. That includes 1008 from Southeast. The agency expects the number to grow by the end of the year, since a lot of the harvest takes place in the fall. “This year is one of the biggest years on record, we’ll actually it’s the biggest year of harvest,” says Biologist Brad Benter runs the sea otter US Fish and Wildlife Service’s marking and tagging program for.... http://www.kfsk.org/2013/11/12/otter-hunting-increases/

Alaska farmers keep selling storage crops at winter farmers markets
BY STEVE EDWARDS
Daily News
November 12, 2013
.............. This Saturday from 10 a.m. to 4 p.m. look for Arctic Choice Seafoods with lots of seafood from Alaska waters, including troll-caught king salmon, rockfish, cod and oysters in the shell; Mat Valley Meats with bison, elk, pork, beef and other meats; Glacier Valley Farm with tomatoes, carrots, potatoes, kohlrabi, cabbage, cauliflower, broccoli, along with sprouts and tofu from Alaska Sprouts and cinnamon rolls and a variety of breads; and Stockwell Farm with a selection of eight varieties of potatoes, including Yukon golds and German butterballs, along with purple top turnips, winter squash, pie pumpkins, purple and orange carrots..... http://www.adn.com/2013/11/12/3173355/alaska-farmers-keep-selling-storeage.html

Coast Guard Cutter SPAR back in action in Alaska 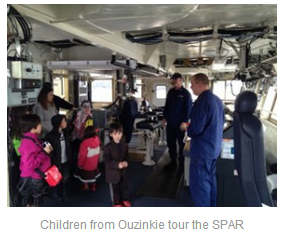 Posted by PA1 Sara Mooers, Tuesday, November 12, 2013
By Ensign Keith Arnold
The crew of Coast Guard Cutter SPAR was underway for the first time in almost three months after a long dockside period at the end of October. During the first day underway, members of the crew participated in a shakedown to reintroduce underway protocols and to test the ship’s machinery. Many in port qualifications were received by the crew and it was again time to work on underway skills. While many of the crew members only needed to refresh their familiarity with underway life, there were a few crewmembers who earned their sea pay for the first time....  http://alaska.coastguard.dodlive.mil/2013/11/coast-guard-cutter-spar-back-in-action-in-alaska/

Norwegian company looks to Alaska for Arctic shipping stopover port
Yereth Rosen
November 12, 2013
A Norwegian shipping company is considering using a yet-to-be-determined Western Alaska port as a hub for growing commerce in the Arctic Ocean, Lt. Gov. Mead Treadwell said Tuesday. Tschudi Shipping Company, a privately-held shipper already doing brisk business in northern waters off Norway and Russia, is eyeing Alaska as a potential location for a transshipment site -- that is, a point where cargo would be transferred or a stop could be made on a longer journey -- to support existing business to and from its facilities at Kirkenes, Norway, in the Northern Sea Route, Treadwell said. Felix Tschudi, the company’s chief executive, has approached state officials with his intentions to.... http://www.alaskadispatch.com/article/20131112/norwegian-company-looks-alaska-arctic-shipping-stopover-port

A new era for Arctic shipping? Chill, please
JOHN HIGGINBOTHAM
Contributed to The Globe and Mail
Published Monday, Oct. 28 2013, 6:00 AM EDT
Last month, a humble marine bulk carrier made history transiting the Northwest Passage, opening a new chapter in Arctic shipping over the top of North America. Reactions depended on where people sit. A U.S. federal government official helpfully discouraged Canadian focus on the Northwest Passage while we’re at odds over its legal status, something lawyers might or might not clear up by the end of the century. For those who favour Arctic development, the voyage offers a tempting glimpse of the new maritime economy oceanic warming may bring. Environmentalists foresee an apocalypse. For those with a love of history, the voyage recalls centuries of exploration and sacrifice by iron sailors in wooden ships searching for a shorter trade route between Europe and Asia..... http://www.theglobeandmail.com/globe-debate/a-new-era-for-arctic-shipping-chill-please/article15086312/

A modest proposal for Pebble: Open minds and no open pit
Keith Searles
November 12, 2013
When I first heard of the Pebble Mine, I was very much in favor of it and excited at an opportunity for my friends around Lake Iliamna to find good quality jobs close to home. The Bristol Bay commercial fishery puts a few of them to work for the short season and brings with it a pretty good infusion of cash, but not nearly enough. And when I lived on the lake, pretty much the only contribution sportfishing lodges made to the local economy were trespass fees paid to local land owners. Of the lodges I knew of around the lake, only one hired local guides. Good jobs are hard to come by around Lake Iliamna. Before moving to the Alaska Peninsula, I worked in a couple of mines down in Southeast Alaska. Sure, the work was hard, but it was satisfying. For the most part, the miners I worked with were good people who appreciated the responsibility of caring for mountains they mined. I only worked with them for a couple years, but during that time I never saw or heard of any significant or long-term environmental impacts from the mines I worked in. So I figured an underground gold mine... http://www.alaskadispatch.com/article/20131112/modest-proposal-pebble-open-minds-and-no-open-pit


Did you know that you can purchase MaxSea products directly through our online store? http://t.co/6Vt4fs32a0 #sailing #boating #sea #ocean
— MaxSea (@MyMaxSea) November 13, 2013


Now just wish #ktuu would put #Kotzebue back on the temp maps. We are a hub after all.
— Wayne Hogue (@ChipheadNet) November 13, 2013


SECRET: I DO NOT multitask! I give what I'm doing full attention, with integrity and focus. Reason I've had success in clutteredmanic world.
— MATT DRUDGE (@DRUDGE) November 13, 2013