December 29, 2013
SATURDAY, DECEMBER 28, 2013
27 questions on Kenai king management
The Alaska Department of Fish and Game has posted an interesting set of frequently asked questions on Kenai River king salmon management. The concise, four-page FAQ focuses on the 2013 season, and delves into issues such as escapement policies, how fish are counted, and research projects. Of course, low king returns to the famed Kenai have caused a lot of... http://deckboss.blogspot.com/2013/12/27-questions-on-kenai-king-management.html 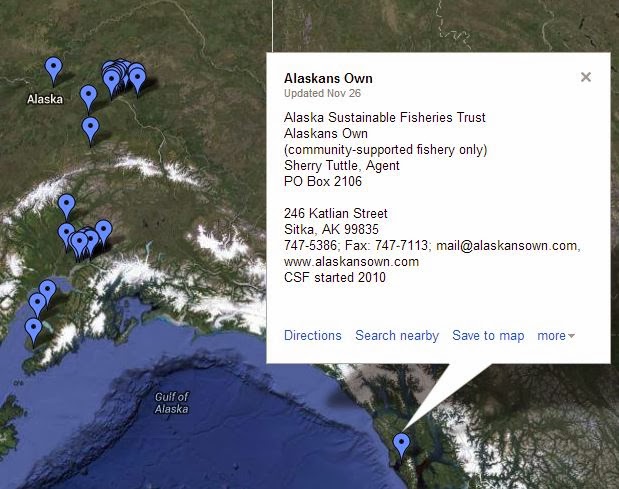 Nancy Tarnai
FAIRBANKS — A Google Map of community-supported agriculture farms shows the growth of CSAs in Alaska. Created by Deirdre Helfferich, managing editor at the UAF School of Natural Resources and Agricultural Sciences, the map introduces 32 CSAs to viewers, providing basic information and contact sources for each farm. Helfferich started collecting CSA names in 2009 because she couldn't find any resources containing that data. She has long been interested in local foods and served as a founding member of the Alaska Food Policy Council. She and her husband have been CSA members at Calypso Farm and Ecology Center in Ester since 2001..... http://www.newsminer.com/features/sundays/alaska_grown/map-shows-growing-trend-of-locally-sourced-food-in-alaska/article_1ae17058-7022-11e3-bb96-001a4bcf6878.html


View CSAs in Alaska in a larger map

WA: State geoduck tests stirred by China expected by end of week
Peninsula Daily News
December 28. 2013 5:02PM
The state Health Department expects to have results of testing for arsenic in Poverty Bay geoducks by the end of this week, and North Olympic Peninsula tribes hope the results will break an impasse with the major customer for the clams. Seafood inspectors in China said earlier this month that they found high levels of arsenic in geoduck clams from Poverty Bay, which is just south of Saltwater State Park near Federal Way. Saying they also found high levels of a toxin that causes paralytic shellfish poisoning, or PSP, in geoducks from Alaska, on Dec. 3 inspectors in China suspended all imports of West Coast geoducks and other bivalve shellfish. The state began special testing for arsenic in Poverty Bay geoducks on Thursday, said Donn Moyer, media relations manager with the.... http://www.peninsuladailynews.com/article/20131228/news/312289993/state-geoduck-tests-stirred-by-china-expected-by-end-of-week

.ca: Baker: The year that cod could not be sold at any price
By Jamie Baker, CBC News Posted: Dec 29, 2013 6:38 AM NT
"How are all the little fishes?" former Fisheries Broadcast host Kathryn King asks me now and again when she passes by the disaster zone otherwise known as my desk (which I'm told is made of wood fibre, but am unable to confirm). "Still swimming," I usually respond. The only thing more sure than fish swimming is that the folks on shore will be singularly like-minded in their effort to scoop them up. It has always been this way around here: Fish swim, and we catch them. What continues to change though is how we catch them — and what we do with them once we catch them. And this year provided some rather eye-opening changes to how the fish business is changing and will change in the future..... http://www.cbc.ca/news/canada/newfoundland-labrador/baker-the-year-that-cod-could-not-be-sold-at-any-price-1.2474078


#China is getting quite comfortable in #Arctic waters ever year. In 2011, I wrote about this. http://t.co/INz7toNOrH pic.twitter.com/gEnVaIOFKm
— HBMG (@TheNewOcean) December 28, 2013


Quite a few notches above Domino's Pizza.