AVO: Cleveland Volcano appears to have entered a renewed phase of elevated unrest 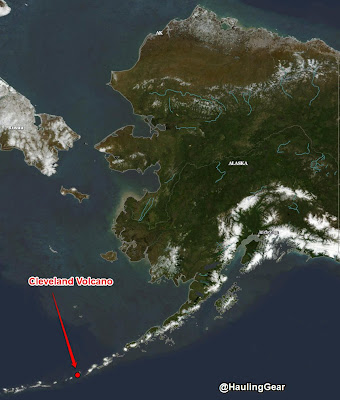 Cleveland Volcano appears to have entered a renewed phase of elevated unrest and AVO changed the Aviation Color Code and Alert Level from Yellow/Advisory to ORANGE/WATCH this morning. Three brief explosions were detected over the past six days and minor ash plumes were observed in satellite data following events on Dec. 30 and Jan. 2 UTC.

Analysis of satellite, wind, and ash dispersion data indicates that the Jan. 2 plume probably did not reach more than 15,000 feet above sea level.

At the present level of unrest, it is possible for brief, sudden explosions of blocks and ash from the summit vent of Cleveland Volcano to occur with little to no warning. These explosions may produce drifting ash clouds and local fallout of ash over the surrounding ocean, on the flanks of Cleveland Volcano, and on parts of Chuginadak Island. It is possible that more energetic explosions will occur that may produce more significant ash clouds.

If a large ash-producing event occurs, nearby seismic, infrasound, or volcanic lightning networks should alert AVO staff quickly. However, for some events, a delay of several hours or more is possible. Cleveland volcano does not have a local seismic network and is monitored using only distant seismic and infrasound instruments and satellite data.

Seismicity at Veniaminof remains slightly above background. Nothing observed in mostly cloudy satellite views of the volcano over the past 24 hours. Web camera images of the intracaldera cone obscured by clouds.

VOLCANO INFORMATION ON THE INTERNET: http://www.avo.alaska.edu
RECORDING ON THE STATUS OF ALASKA'S VOLCANOES (907) 786-7478