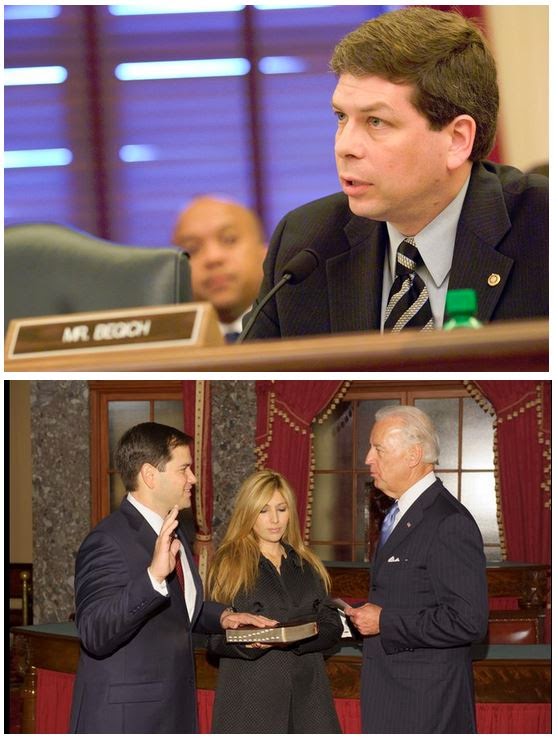 BY MOLLY DISCHNER, ALASKA JOURNAL OF COMMERCE
Published: 2014.03.13 11:40 AM
Sen. Mark Begich and Florida Republican Sen. Marco Rubio introduced legislation March 6 to exempt fishing vessels from proposed discharge rules that could require stringent monitoring of the rainwater that pools on deck. “I introduced this legislation with (Rubio) so shippers and other vessel owners that visit multiple ports don’t have to deal with the unreasonable patchwork of EPA rules telling them how to manage ballast water and other discharges,” Begich said in a formal statement. “It sets a national standard for ballast water and other discharges and significantly tightens these rules over time. It gives a permanent exemption for fishermen and other small boat owners who are not considered part of the problem. This bill has broad bipartisan support and the backing of the maritime industry and Alaska fishermen.” The Vessel Incidental Discharge Act would apply the Coast Guard’s 2012 ballast water... http://www.alaskajournal.com/Alaska-Journal-of-Commerce/March-Issue-3-2014/Law-introduced-to-exempt-fishing-vessels-from-EPA-discharge-rules/

Hawaii, Alaska, territories team up on Jones Act
Posted: Thursday, March 13, 2014 5:25 pm | Updated: 9:55 pm, Thu Mar 13, 2014.
Associated Press |
HONOLULU - Lawmakers from Hawaii, Alaska, Puerto Rico and Guam are teaming up to pressure the U.S. government for relief from a maritime law passed in the 1920s. The Jones Act was designed to protect the domestic shipping industry. It states that only ships made in the U.S. and flying the country's flags can deliver goods between U.S. ports. That means a cargo ship from China cannot deliver goods from one U.S. port to another. It can't, for example, take goods picked up.... http://www.newsminer.com/news/alaska_news/hawaii-alaska-territories-team-up-on-jones-act/article_84b18632-ab17-11e3-b7cd-0017a43b2370.html

Geoduck dive fishery opens; market found
by Leila Kheiry
March 13, 2014 3:22 PM
Phil Doherty of the Southeast Alaska Regional Dive Fisheries Association says they decided to move forward with fishing after meeting last week with some processors. He says those processors found markets other than China for the clams. “We did our PSP sampling on Sunday. We sent the geoducks up to DEC lab on Monday, got the PSP results on Tuesday and of the six areas that we sampled, three of them passed PSP levels, so we were able to fish,” he said. PSP, or paralytic shellfish poisoning, is caused by eating shellfish contaminated with... http://www.krbd.org/2014/03/13/geoduck-dive-fishery-opens-market-found/

Disaster funds on hold until state, AVCP agree on split
BY MOLLY DISCHNER, ALASKA JOURNAL OF COMMERCE
Published: 2014.03.13 11:41 AM
Alaska is set to receive $20.8 million for the 2012 salmon fisheries disasters, but how the money will be used is still being decided. First the State of Alaska and the Association of Village Council Presidents, or AVCP, must work on how to split the funds between Cook Inlet and Yukon-Kuskokwim stakeholders, said Art Nelson, policy and outreach director for the Bering Sea Fishermen’s Association. The two parties haven’t met, according to AVCP President Myron Naneng. “We haven’t had the chance to sit down.... http://www.alaskajournal.com/Alaska-Journal-of-Commerce/March-Issue-3-2014/Disaster-funds-on-hold-until-state-AVCP-agree-on-split/

Wal-Mart decision on Alaska seafood could be bad for fisheries
Philip A. Loring
March 13, 2014
Wal-Mart Stores Inc. will once again start selling Alaska salmon, but is its decision good for Alaska’s fisheries and fishing communities? State and federal politicians and industry boosters say yes; but with so many unaddressed social and ecological challenges facing our fisheries and fishing communities, I am not so sure. For those unfamiliar with the story, Wal-Mart had a policy to purchase only seafood that carries certification from the Marine Stewardship Council. Several players in Alaska’s seafood industry, however, have decided to no longer pursue MSC certification. As such, it appeared as though Alaska salmon would disappear from Walmart shelves. However, in response to extensive lobbying by multiple state and federal policymakers, including U.S. Sens. Mark Begich and Lisa Murkowski and Alaska Gov. Sean Parnell, the retail giant has reversed its position. In its reversal, however.... http://www.alaskadispatch.com/article/20140313/wal-mart-decision-alaska-seafood-could-be-bad-fisheries

Crab fisheries, Yukon harvests, Bristol Bay on board agenda
BY MOLLY DISCHNER, ALASKA JOURNAL OF COMMERCE
Published: 2014.03.13 11:34 AM
The Alaska Board of Fisheries will discuss a range of new fisheries and increased opportunity for state crab management at its upcoming meeting March 17-21 in Anchorage at the Sheraton Hotel. The proposals on before the board include requests to open commercial tanner crab fishing in Prince William Sound and sport tanner crab fishing in Cook Inlet, increase the golden king crab fishery in the Aleutian Islands, adjust the gear and species regulations in the Norton Sound king crab fishery, develop a red king crab fishery near Adak, and certain Bering Sea changes. The Alaska Department of Fish and Game has also proposed regulatory and management... http://www.alaskajournal.com/Alaska-Journal-of-Commerce/March-Issue-3-2014/Crab-fisheries-Yukon-harvests-Bristol-Bay-on-board-agenda/

Alaska and world seafood market expert encourages Petersburg to adapt (no paywall)
March 13, 2014
By Kyle Clayton
Director of the University of Alaska's Institute for Social and Economic Research Dr. Gunnar Knapp encouraged community members that doing more with less will be a central theme in the coming decade for fishing communities such as Petersburg and others across Alaska. Knapp was the guest speaker for the Petersburg Chamber of Commerce banquet last weekend. After touting Petersburg as one of the most successful fishing communities he's encountered, he encouraged the community to adapt in changing times. "Look for ways to diversify beyond one industry, beyond fishing to..... http://www.petersburgpilot.com/story/2014/03/13/news/alaska-and-world-seafood-market-expert-encourages-petersburg-to-adapt/2205.html

Fish proposals seek new limits
By Wolfgang Kurtz
March 13, 2014
According to Seward Fish & Game Advisory Committee members and charter industry veterans gathered together for a meeting of the committee last week, the Seward area can expect more traffic on Resurrection Bay this summer as fisherfolk are turned away from, or are turned off to, popular fisheries to the west and north. Closings on the western Kenai Peninsula, including the Kenai River as well as closings for Mat-Su Valley rivers and streams..... http://www.thesewardphoenixlog.com/story/2014/03/13/local/fish-proposals-seek-new-limits/2427.html

Officials Search For Entangled Humpback Whale In Hawaii
AP  | by  AUDREY McAVOY
Posted: 03/13/2014 5:28 pm EDT
HONOLULU (AP) — Hawaii officials have been looking for a humpback whale that appears to be caught in fishing gear and is dragging red buoys. Fishing line seems to be wrapped across the whale's body and tail, Ed Lyman, the large whale entanglement response coordinator for the Hawaiian Islands Humpback Whale National Marine Sanctuary, said Thursday. The animal was trailing 50 to 60 feet of heavy gauge line and two red plastic buoys were seen caught in the gear. Marine mammal response teams are hoping to find the animal so they can attempt to.... http://www.huffingtonpost.com/2014/03/13/hawaii-entangled-whale_n_4959712.html


This is such a great project, lets all help it get funded! Its a collection of works from FisherPoets Gathering... http://t.co/xvFgfCbfwc
— Jen Pickett (@pickfysh) March 14, 2014


Crash report to @googlechrome. Shockwave Flash the killer. Can you please give us a spike to put through it's heart? pic.twitter.com/Rfjg04zxMU
— Hauling Gear #Alaska (@haulinggear) March 14, 2014


here's a special place in hell for the person who says 'present' when everyone else's says 'here'
— Grumpy Cat (@GrumpyAssCat) March 14, 2014


Lesson of the day (perhaps even the year): Never let anyone tell you what you can't do! http://t.co/qu86RnLoCz #MovingForward
— Globalstar (@Globalstar) March 14, 2014